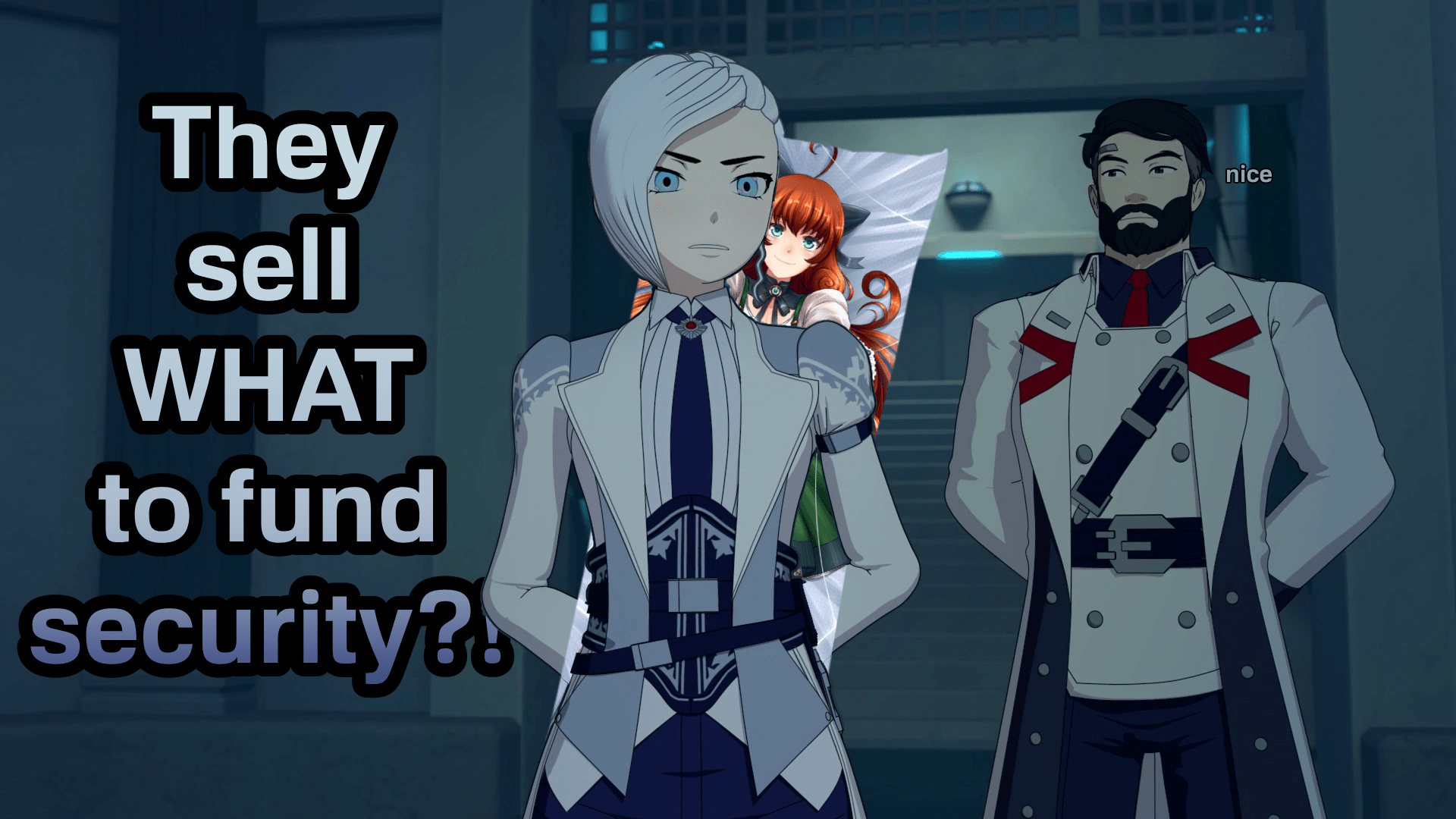 It’s no secret that the defense against the forces of Salem invading our Kingdom is taxing us in many ways: physically, mentally, emotionally and, most importantly, financially. In a move very few could have predicted, however, the Atlas Ministry of Defense has launched a line of body pillows with famous Atlesian huntsmen and huntresses on their covers, displayed in a somewhat suggestive manner. The intent is for the body pillows to partially cover the costs of defending the country against Salem.

The body pillows are advertised as being “close in size to the original” and are made from ‘shredded memory foam’. I assume this material involves absorbing your awkward teenage memories or something similar, which would make this sleeping buddy a must-buy for everyone. The pillow covers are adorned by various popular real-life and fictional characters. The list presented to the public includes, among others:

The pillow gloriously imprinted with the likeness of General James Ironwood and his immaculate beard is an exclusive, with only 100 covers to be printed. As such, the Ministry of Defense has stated they will hold a contest for these pillows and everyone who buys at least 3 others is eligible. It is unclear whether or not the contest idea will attract many customers, however, considering that I’m waiting for my Robyn, Marrow and Flynt Coal pillows to be delivered, I am hopeful to get one myself. For collection purposes of course.

I spoke with the proposer of the idea and assistant to the Minister of Defense, Rina Swann, about this project. I asked her how did she come up with the idea. “We had an emergency meeting to immediately raise money and everyone in the team had to give a single suggestion. The others said all the reasonable things like raise taxes for the middle and lower class or take a loan from Vacuo, so I had to come up with something on the spot. I remembered our huntsmen and huntresses receive a lot of… emotionally charged messages in their Scrollshare profiles and private channels. We decided to capitalize on those emotions in a way that’s already popular in Mistral – body pillows.”

I was also curious about the choice of characters – and a curious omission in their line-up. “We have to get permission from living people, but in the case of Ms. Schnee or the Ace Operatives – they didn’t have much choice – they must do whatever is best for Atlas. And right now that would be printing their bodies in barely lewd positions on pillows for teenagers to sleep with. Mr. Ebi unfortunately was unable to give consent to join this project, despite our best efforts. Team FNKI on the other hand, was eager to join, but I fear that it was less from the love of our country and more because of them wanting to become more popular. As for Mr. Branwen, Ms. Hill and Jacques – we have their signatures so we’re free to do whatever we want with their likeness.” Rina Swann then chuckled heartily. “You wouldn’t believe what you can get a person to sign if you tell them that’ll help them get out of jail faster.”

Suddenly the ground shook, as it was time for our hourly reminder that a massive Grimm whale is still lying on top of Atlas. Swann took hold of a nearby bookshelf, then continued: “The real problem was the V-Huntress Penny AI. We had to make a contract with HuntoLive in Argus. Since we don’t have any money, we promised they could use the “real” Penny in their future recordings. Honestly, I think we misplaced her, but I’m sure we can make more.” Naturally, I asked if they considered printing body pillows of the actual Penny instead, thus negating the need to enter a contract. Rina Swann shook her head: “We did and we sold only one pillow! ONE! Apparently people think that just because she betrayed Atlas and turned evil you shouldn’t buy her merchandise. Still, the contract was well worth it, as the Penny AI pillow is second in sales only to the body pillow of Jacques Schnee. He is very popular with weapons enthusiasts.”

I still had one final question. Why only 100 copies of the magnificent General James Ironwood pillow? Why can’t everyone in Atlas sleep surrounded by determined leadership and suave machismo? Rina went silent, then whispered: “We all know that any Atlas-loving citizen would buy several of those pillows, so we had to make them. Unfortunately, we never got the approval from the General himself. We only made 100 hoping he doesn’t find out. Can you keep it a secret?”

Of course I can, Rina. If I get my own General Ironwood body pillow, that is.

We extend our thanks to the fantastic ADSouto for their amazing body pillow artwork. To see their other works, check out ADSouto on DeviantArt and follow them on Twitter.