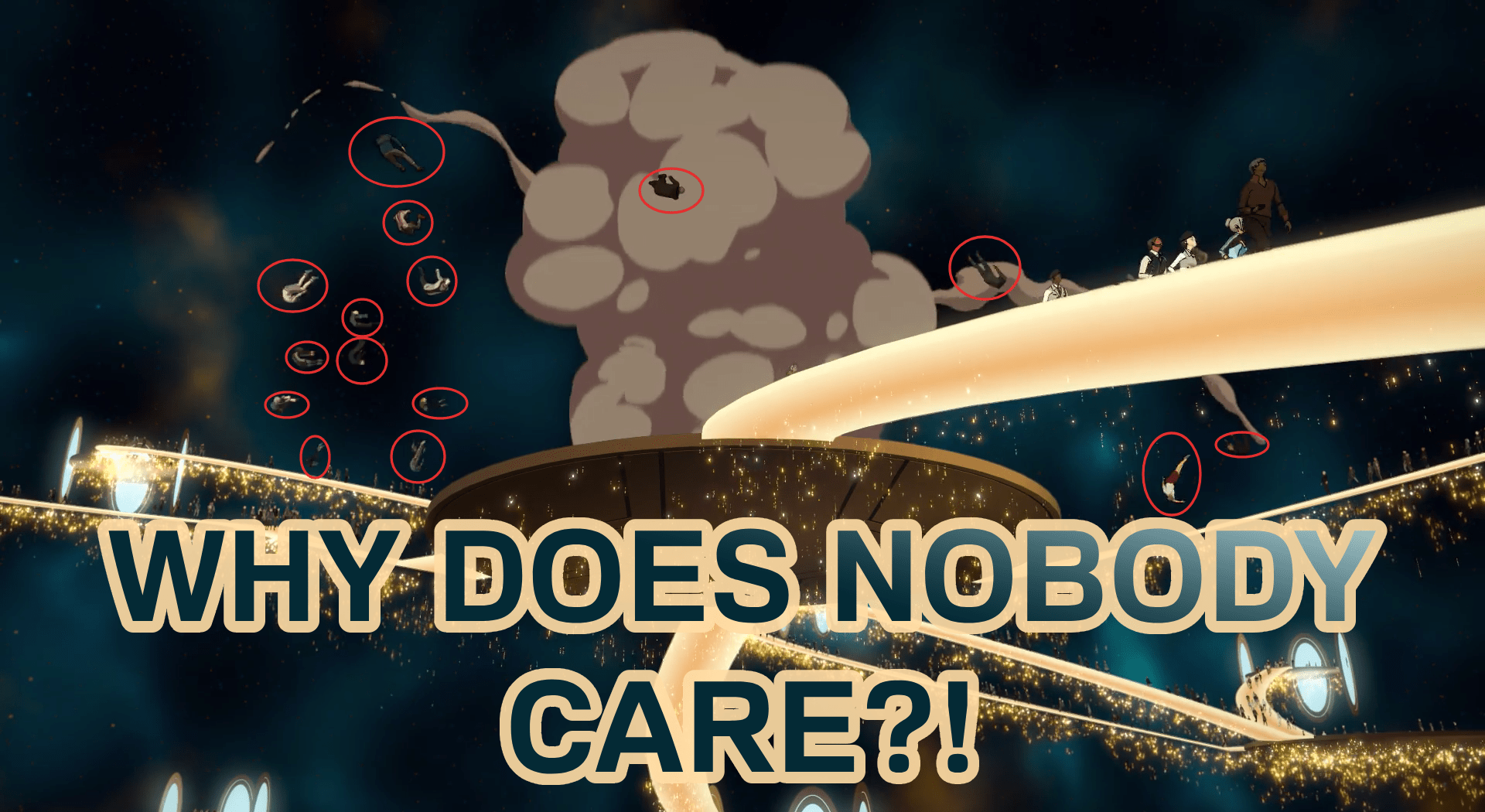 Not long ago three mysterious flying women have terrorized the skies of Atlas. Two of them were identified as Winter Schnee and former protector of Mantle Penny Polendina. The third, fire-wielding and dangerously attractive young woman has not been identified, but several witnesses, including me, saw that she had a weird prosthetic on her left arm and an eyepatch over her eye on the same side. Among the many questions we have, there are some that are more pressing than others – ‘why did they blow up 15 people’ is one of them.

As noted in our previous article, the three women apparently know each other and the cause of their conflict is likely a complicated love triangle. To add to the confusion, this time it seems more strange women are involved, likely making this the most complicated love polygon in Remnant’s history. Let’s try to understand the details of this tragedy caused by loved.

Although witnesses cannot confirm the cause of the initial explosion, it either has to be the alluring dark-haired woman with fire powers or the red-hooded rose petal girl that split into four colorful girls for some reason. After the four color-coded girls went to fight the dark-haired woman, according to the most trusted witness, me, she quite literally burst into a massive fire tornado without any Dust! Add one more to why we should abolish the use of powerful semblances altogether… Unfortunately, the witness cannot report on anything further, as I was too busy running for my life from the fire tornado. All I’ve heard was a scream after some other short girl knocked the yellow one of the four into the dark abyss.

To get this straight, the four colored girls were going at it with the dark-haired fire woman probably because of the whole love-triangle thing with Penny and the older Schnee. Maybe the fiery one left Penny and broke her robot heart? Then the short one, who is probably the dark haired one’s newest girlfriend after Penny, pushed the punchy one of the four into the deep darkness below, doubtlessly killing her. The Faunus of the four, presumably the punchy one’s girlfriend, began screaming like mad. And then PENNY arrives, probably to take revenge on her ex or something, and starts fighting the fire tornado woman. It’s all so complicated and I don’t want to even begin unraveling the romantic drama they’re all in. I have only one question – why did those 15 people blow up?!

Among them were some I personally knew like Joanne Rudolph, the Yellowtzer-winning journalist of Lance of Liberty. And while I despised her work professionally, she was still a human being I shook hands with while we both were pretending to fake a smile. Another notable person who perished in the explosion was journalist-turned-boss Neil Dewson, owner of the unreputable, but large Mantle Daily. There are likely many more journalists among the deceased, as that day was the scheduled annual Atlas Journalism Conference, but it’s not like I can remember all of them because we weren’t invited this year.

And you know what the worst part is? When 15 notable, if somewhat arrogant, professionals in the field of journalism died nobody let out a soul-piercing scream for their fate. Nobody cried, or sobbed, or went to fight their possible murderers. People just ran. And now, after so much time has passed, there is not a single article about them, who were they or what were their achievements. We only know that some more color-coded-children fell into the darkness and moments later the only flying woman to emerge out in the other side was Winter Schnee with her over-the-top semblance. Sure, they might be journalists, but even we deserve some retribution after crazy flying people blow us up in a weird space dimension.

Considering that the vast majority of Yellowtzer prize winners likely died in the explosion and the ensuing chaos, I understand the necessity of having at least one prize-winner get out of Atlas, or else we’d look bad in front of Vacuan news companies. Therefore, I am officially submitting this article to the next year’s Yellowtzers for breaking the news of one of the most horrible catastrophes in recent memory.

So how does it feel Kerry to both be a survivor of the fall of Beacon and Atlas?

Well I don’t know about any therapists per say. But I know from a friend about a sketchy girl who can help people with her semblance for a price. But I would not recommend that personally because well yeah she is a bit morally grey to put it lightly. Regarding Ironwood all I know from my team mate is that no aura signatures are left on Atlas.

[…] Conference, to which none of the staff at vytal_news was invited, but I digress. As noted in a previous article, a bunch of journalists fell to their deaths in the mysterious portal dimension. It is entirely […]