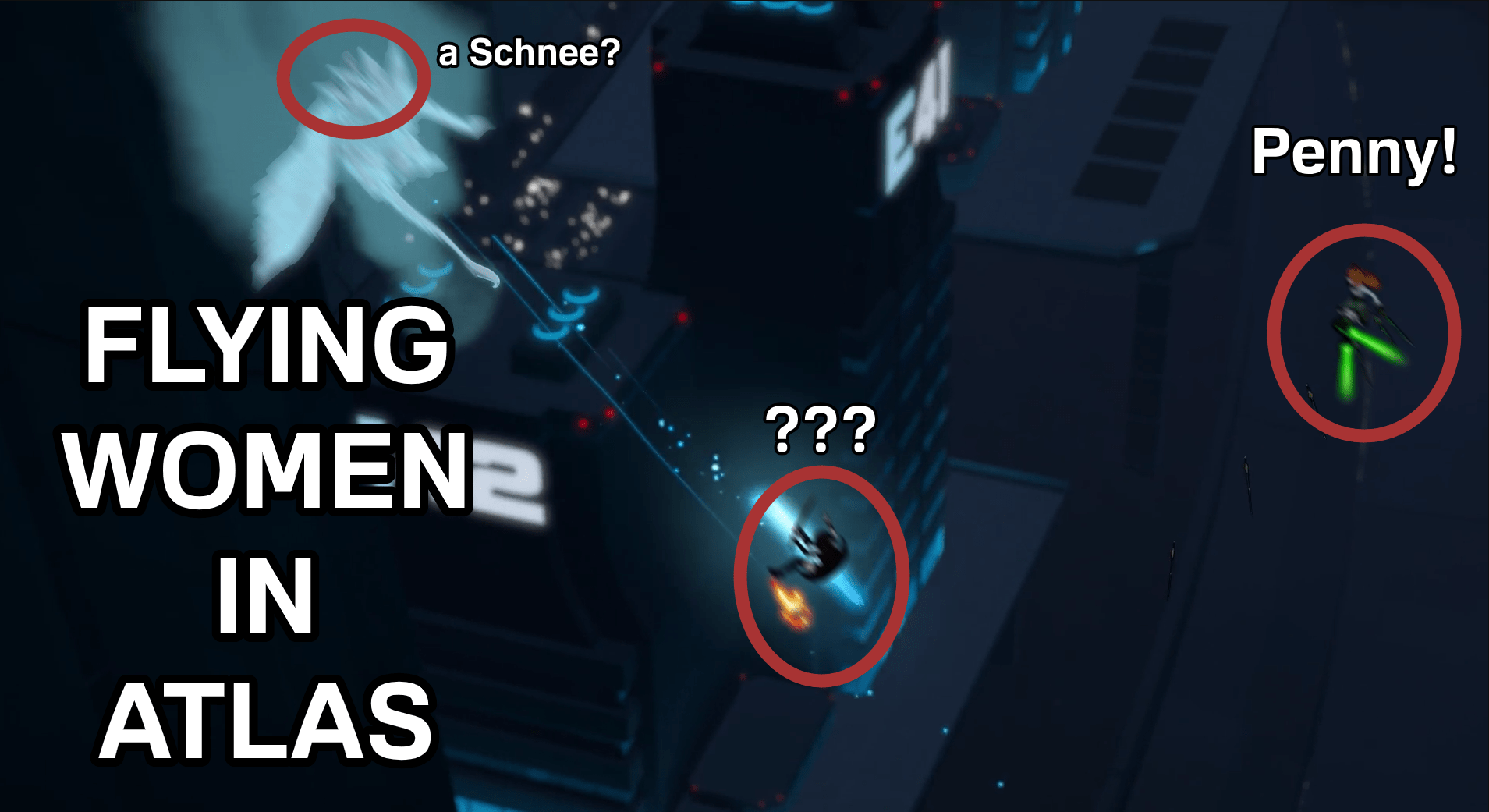 Several confirmed sightings of strange people flying in Atlas have appeared this evening. Photos and eyewitness testimonies have stormed ScrollShare, with users claiming at least four people flew in Atlas, not by the means of an airship and certainly not in the claws of a Nevermore. Well, at least three of the four had nothing to do with Grimm, it seems.

Around 10:27 PM Local Atlas Time, three women flew out of the M3 skyscraper’s top floor through a hole in wall. Thanks to dozens of people taking photos on their scrolls, it was quickly identified that Penny Polendina, Mantle’s robotic protector, was among the three. Another one of the women is presumed to be either Winter or Weiss Schnee, due to distinct white hair and the ability ride a glowing white Manticore, which is difficult for anyone who isn’t a Schnee. The third woman with black hair and fire jets could not be identified.

It is not clear what they were doing hundreds of feet in the air, but social media user opinions range from fighting to movie-shooting to dancing. Most baffling is Penny’s role in this, as people quickly began questioning why Mantle’s Protector was flying around in Atlas, and not saving lives from the Grimm in Mantle. Some even wonder whether this was an attempt at a publicity stunt, showing Penny “apprehending” a criminal to improve her reputation. This, of course, is referencing election loser’s Robyn Hill’s election victory party, where video footage showed Penny killing civilians. It was later proven that the footage was indeed fabricated yet not everyone was convinced, given Atlas’s terrible reputation with cyber-security.

We attempted to talk to our very own journalist Joseph Galvan, who first-hand witnessed the event. “Are you an angel…?” whispered Joseph, pushing his hand to the window, watching the black-haired woman fly through the air by shooting fire from her heels. “A semblance couldn’t do that… It has to be magic…” he said, breathing heavily onto the window. It appears that even our very best journalists can be enthralled by mysterious flying women.

A few other people from Mantle also reported on ScrollShare that they saw a young child fall from the sky, possibly even from Atlas, and land onto Mantle outskirts completely unharmed. A user by the name of “SixteenTons” posted the picture below and stated: “Now THAT’S a landing strategy! Kids completely stopped thinking these days!”

It is not clear who this mysterious child is or whom they belong to, but we have been informed by General Ironwood that any witnesses or those currently with the child should immediately report to the General’s offices, to help find the kid’s parents as soon as possible.

[…] noted in our previous article, the three women apparently know each other and the cause of their conflict is likely a complicated […]