Should We Stop Sending Children to the Front Lines? 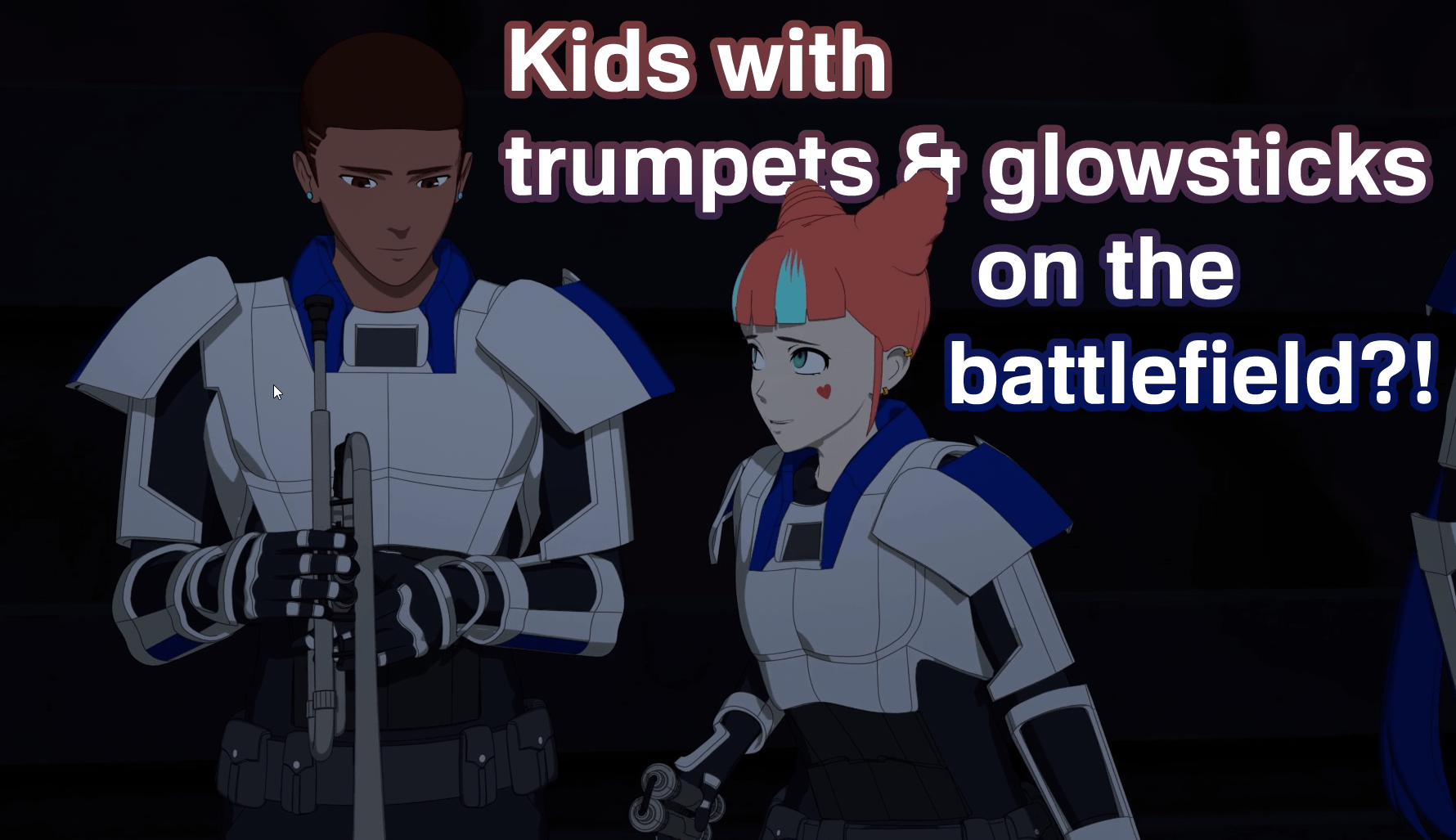 This time I sure have done it. I’m now in a trench, surrounded by brave/stupid Atlesian soldiers on one side, and terrifying waves of Grimm on the other. Due to journalist union laws, I do get a 30 minute break, which I am spending to write this article on my scroll as people and Grimm are dying all around me. One thing that’s been horrifying pretty much all of us here, apart from the monstrous Grimm whale that’s vomiting more Grimm, is the fact that we’re fighting alongside kids. Actual kids. What the hell, Atlas?!

As someone who not-so-long-ago graduated Atlas Academy (and even rejected a strong invitation into Special Operatives), I know that the idea of questioning authority isn’t something that’s viewed lightly. But this is too much. Next to me are Atlas’s team FNKI, who look nowhere near graduation, but right now are battling horrific monsters by using trumpets and glow-sticks. They look scared out of their minds, as they should be.

“We didn’t even get helmets!” said Flynt Coal, leader of team FNKI. “Apparently, they were all out of children’s sizes…” he lamented, while dodging a Sabyr and blasting it with his trumpet into three other Grimm.

A few trenches farther, they have actual combat school kids, running around, providing Dust munitions for the soldiers and medical supplies for the field medics. They can barely multiply mentally, but are bravely risking their lives on the battlefield. What kind of parent, no, what kind of country would allow child soldiers like that? Unfortunately, I feel like it’s Atlas.

And finally, we can’t forget about the rest of our youth. Recent Academy graduates like me. Sure, I may be a few years older than a teenager (though I certainly don’t look the part!) but as a young, single Faunus, I feel like a battlefield isn’t the right place for me. I should be protected and cherished, not forced to consider my own mortality! Is it too late to stay way in the back and be a war reporter instead?

Aw jeez. A megoliath just trampled my squad’s commanding officer. I feel a sense of déjà vu. Welp, I hope you all remember my articles and/or avenge my terribly untimely death.

Someone get this reporter an evac and the meme-team kids some portal relief. Also a couple liters of Glacierade for Mr. Coal, ’cause all those B-flats won’t be much better for his windpipe than a Sabyr bite if this keeps up.