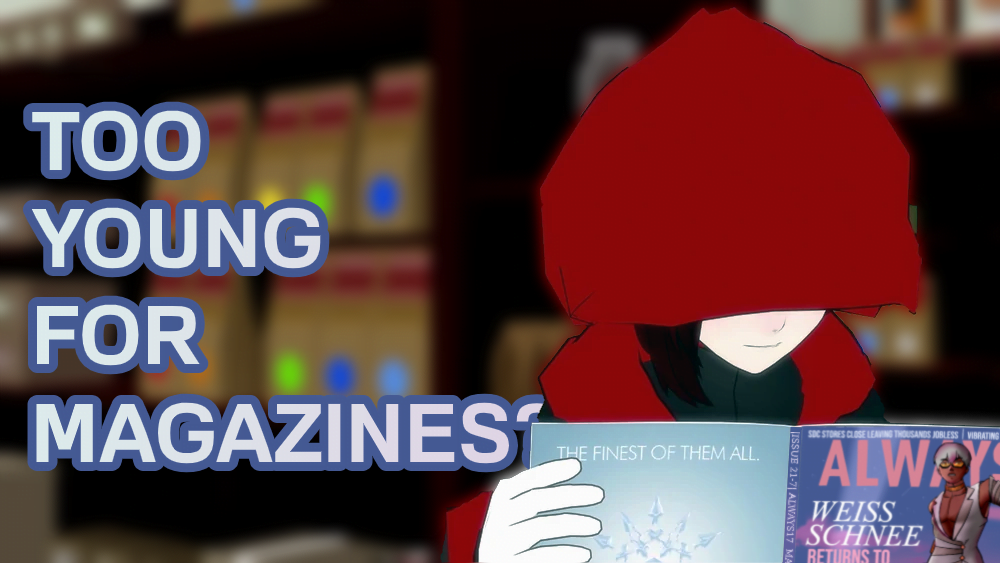 Hello, intern Ash of Shade Academy writing to you again. I hope everyone had a pleasant Nondescript Winter Holiday surrounded by your loving family (or in my case loving teammates). During the holidays, a new controversy came up, one that I have a personal interest in. I’m, of course, talking about huntsman style magazines, like the one produced by the fashion brand ALWAYS 17.

The magazines, of which there are several popular and long-running ones, like H, ROGUE and the aforementioned ALWAYS 17, have received widespread criticism over the last few years, but the controversy peaked during this Winter Holiday Season. Hundreds of concerned parents have voiced their displeasure, mostly on ScrollShare, over how provocative the magazine covers are and how blatantly they advertise deadly weaponry to a younger demographic. This holiday season, in particular, has seen a rise in commenters complaining that their children will ask for expensive huntsmen outfits and transforming weapons.

The huntsman style magazines focus on the newest fashion and weaponry of young huntsmen, as well as news and rumors in the huntsmen world. Interestingly, the magazines are most popular among teenagers from 15 to 19, meaning the majority of readers of such magazines are too young to be huntsmen themselves. But you have to wonder, if it’s aimed at teenagers, is it that bad that they’re the ones reading those magazines? According to their parents – yes.

“I find my little Broccoli sneaking off during trips to the store to read that horrible magazine Always 17,” wrote one angry parent on ScrollShare. “The huntsmen and huntresses on the cover dress so scandalously and their dangerous weapons are fully featured and even unsheathed! They look like they are threatening my child!”

Other parents are more concerned with the placement of the magazines and their ads. “You can see those ‘huntsmen magazines’ all over the stores, right next to the comics books! And the ads are the worst – you can see ROGUE magazine advertising stylish assault rifles right next to the coloring pages – now my eight-year-old daughter wants a gun for her Undescript Winter Holiday present!” writes another parent.

Personally, I enjoy ALWAYS 17 a lot – it offers new ideas for fashion and cool weapons to gawk at. The news and rumors sections are pretty nice too, since I mostly get my news from here and the magazine tends to cover things that are less appealing to the general public and more interesting to huntsmen or huntresses. I also asked my teammates on their opinions of these magazines.

Our team leader Bailey was pretty irritated with the concept, so I asked her to explain why she felt that way. “They set unrealistic expectations on huntresses – you can see that they all completely change their outfits basically every year. That’s ridiculous – wasteful and expensive! I have to protect my combat outfit as much as possible, because I couldn’t ever buy a new one. Meanwhile, the magazine shows off new seasonal fashion. Who do they think we are? Rich old people?!” I have to agree with Bailey on this one – being a huntress is expensive as it is – you have to buy food, Dust and keep some Lien for repairs. I like the new outfits everyone shows off, but I could only dream of having them myself.

I also asked Nicolle on her opinion on the ALWAYS 17 magazine. She told me it was so-so. When I asked her to elaborate, she explained: “The content isn’t very filling and the consistency is a bit too chewy. It just tastes like any other magazine.”

How about you, readers? Do you enjoy these huntsman style magazines? Do you have a favorite huntsman model or weapon? Or perhaps you are also a concerned parent? I’d love to read your responses!