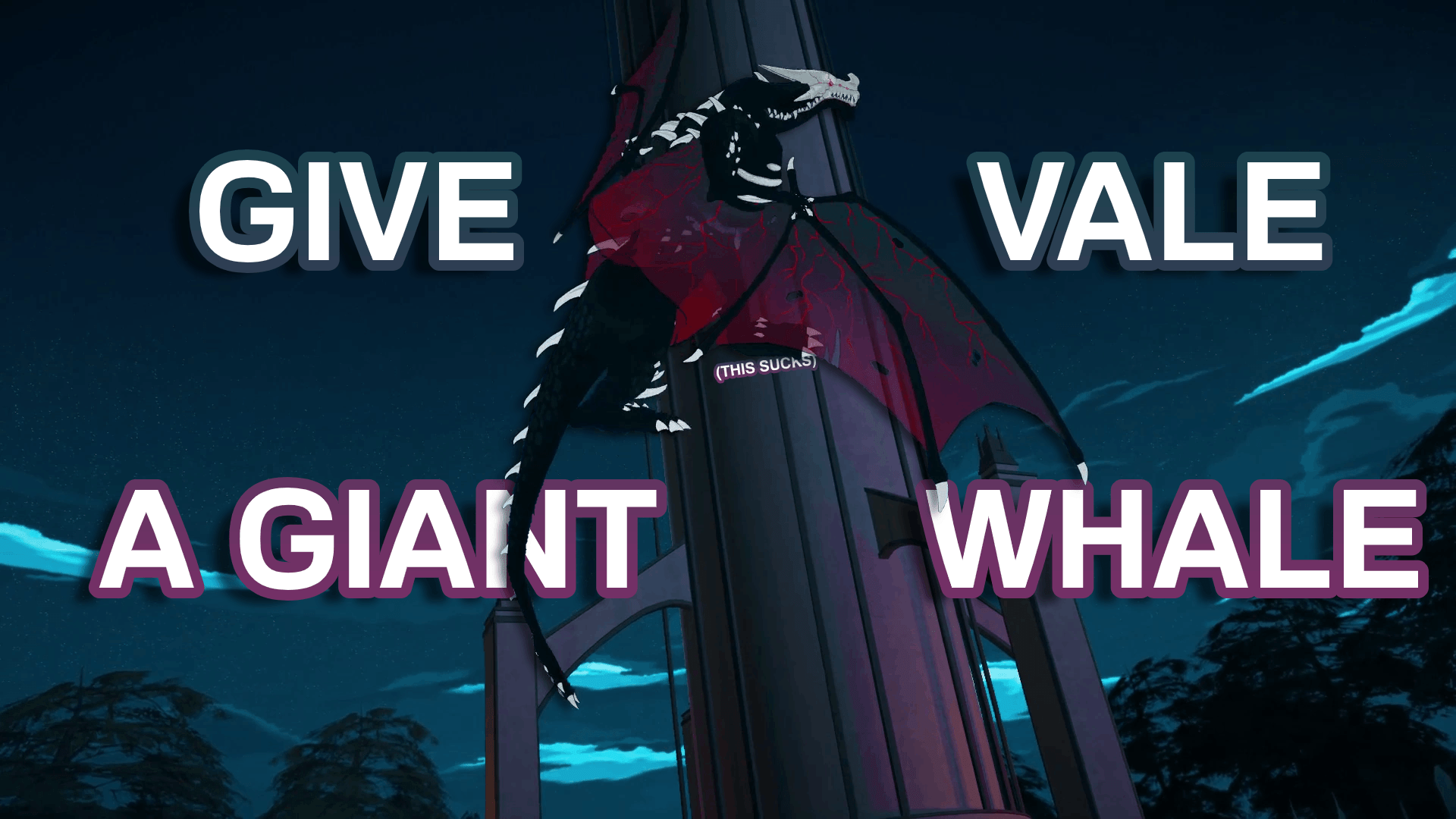 News are slowly spreading all across Remnant that a gargantuan Grimm-vomiting whale just beached on top of Atlas. There’s even reports of people reportedly flying out of the inside of monstrosity. That’s unbelievable, but too bad my city doesn’t have anything cool like that.

As a young, charismatic local entrepreneur, I value any small detail that makes the great city of Vale stand out – it’s diverse culture, tall and imposing buildings, 24/7 Dust shops, an active nightlife and much more. It’s no secret that Vale has been in a rough spot recently, as White Fang terrorists, apparently by the order of some Salem woman, blew up our city, hacked Atlesian security and, worst of all, destroyed one of my three nightclubs. While I’m used to my clubs being wasted and my henchmen getting destroyed any time a teenager with a gun walked in, the damage done to the local night scene is unheard of. Almost 85% of potential clubgoers in Vale are either dead or can’t leave their homes due to fear of being viciously mauled by a Grimm. And what did Vale get out of all this? A stupid frozen Wyvern on top of Beacon that can’t even die.

At least we used to get some pity points, meaning some tourists to take photos of it while pretending to wipe away a tear and then spending the night drinking in one my two remaining clubs. Well, that all dried up thanks to Atlas – they got themselves a newer, bigger Grimm and it’s all the rage these days. Let’s objectively compare them, shall we?

As you can see, in every single category the immense Grimm whale wins. In order to revitalize the city, I propose Vale exchange Kevin with Monstra. To make the deal more acceptable, Vale could also give up the Beacon Ruins to Atlas, as a possible museum destination or something (and we Valeans know there’s no worth in them left for ourselves anyway). If Atlas does not agree to these terms, we might have to find a new colossal Grimm creature, one that’s better than a dumb dragon-reject and would hopefully rhyme with the name of our city/country. So far I’m partial to “Vale’s Giant Grimm Snail” idea.

Remnant's Astronomers Come Up With Constellation Names, Proceed to Insult Everyone | vytal_news

Honest to gods, Hei Xiong. Keep bellyaching like this and you’ll wreck Kevin’s self-esteem. You really wanna see how ‘unexploitable’ a 70-meter spawning beast with depression can get? If Kev wakes up & starts dropping Apathy deuces we’re giving you the mop.