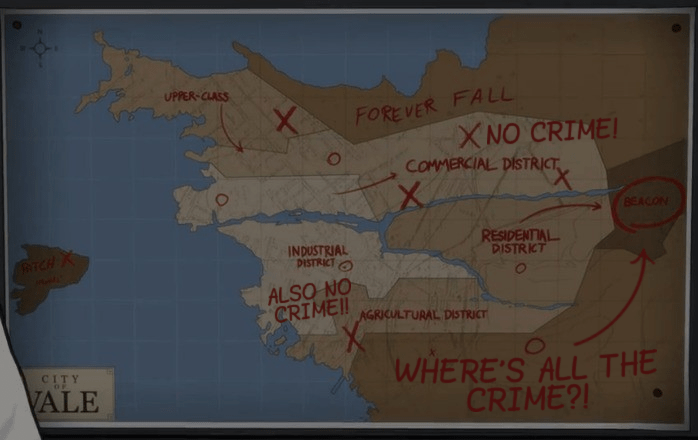 After the Fall of Beacon our Kingdom’s never been the same. Grimm are infesting pretty much every part of our capital and almost everyone, huntsman or civilian, are doing their best to work together and rebuild our home. It’s a problem and we need to stop it.

With everyone working together (including the remaining Valean huntsmen and even the police), the city of Vale reported it’s first week without any crime. Not a single stabbing, domestic conflict or even a jaywalking ticket! OK, the last one’s understandable, at least, since there’s practically no roads left. But you get the idea. No crimes for a week. And then it somehow got even worse – this ‘no crimes’ thing has repeated for the last three weeks.

The less perceptive or the morally naïve of you might be asking why would I want crime in my city, being the dashing young entrepreneur that I am. The uncomfortable truth is – money brings in more money. And the fastest way to get that money is through crime. Underground dust markets, illegal weapon mods, old fashioned robberies – that’s where the Lien is. And we need a lot of it if we want to rebuild Vale.

Some of you might think that just because I own some clubs (where shady dealings may or may not have been happening) that I only want crime in Vale just for myself. No! I want crime back in Vale for everyone’s sake! My henchmen have families that they return empty-handed to, because there’s nobody that wants bodyguards for protection or mean faces for getting back loans. Roussel even had to put a stop to his DJ hobby, since being a henchman was his main source of income. Now who’s going to pay all of his hospital bills?

Even if you somehow managed to overlook the vast economic benefits of crime, remember that we need crime for the children! Beacon, Vale’s only huntsman academy, is gone and while kids can get combat practice from reducing countless numbers of Grimm, it’s not where they can learn to become experienced huntsmen or huntresses. Grimm don’t think, Grimm don’t try to run away from the crime scene through the back door and Grimm certainly don’t shank you when offering you a handshake. Our huntsmen-in-training are missing out on those valuable life lessons by not stopping any crime.

When you go out there into the Grimm-infested streets, think about doing some crime. It doesn’t have to be anything too major – start off with some light breaking and entering, maybe rob a helpless person. Really, every bit counts. If it’s not for me, my henchmen or even our children – do it everyone. Do it for our Kingdom of Vale.

Chief editor’s note: vytal_news does not condone crime and the worrying opinions of its writers do not reflect the values of the entire staff.

I’d be more sympathetic to Vale’s crime shortage if the rest of Remnant wasn’t compensating five times over. Just offer what’s left of the SDC a local franchise and your corruption needs oughta be more than filled.