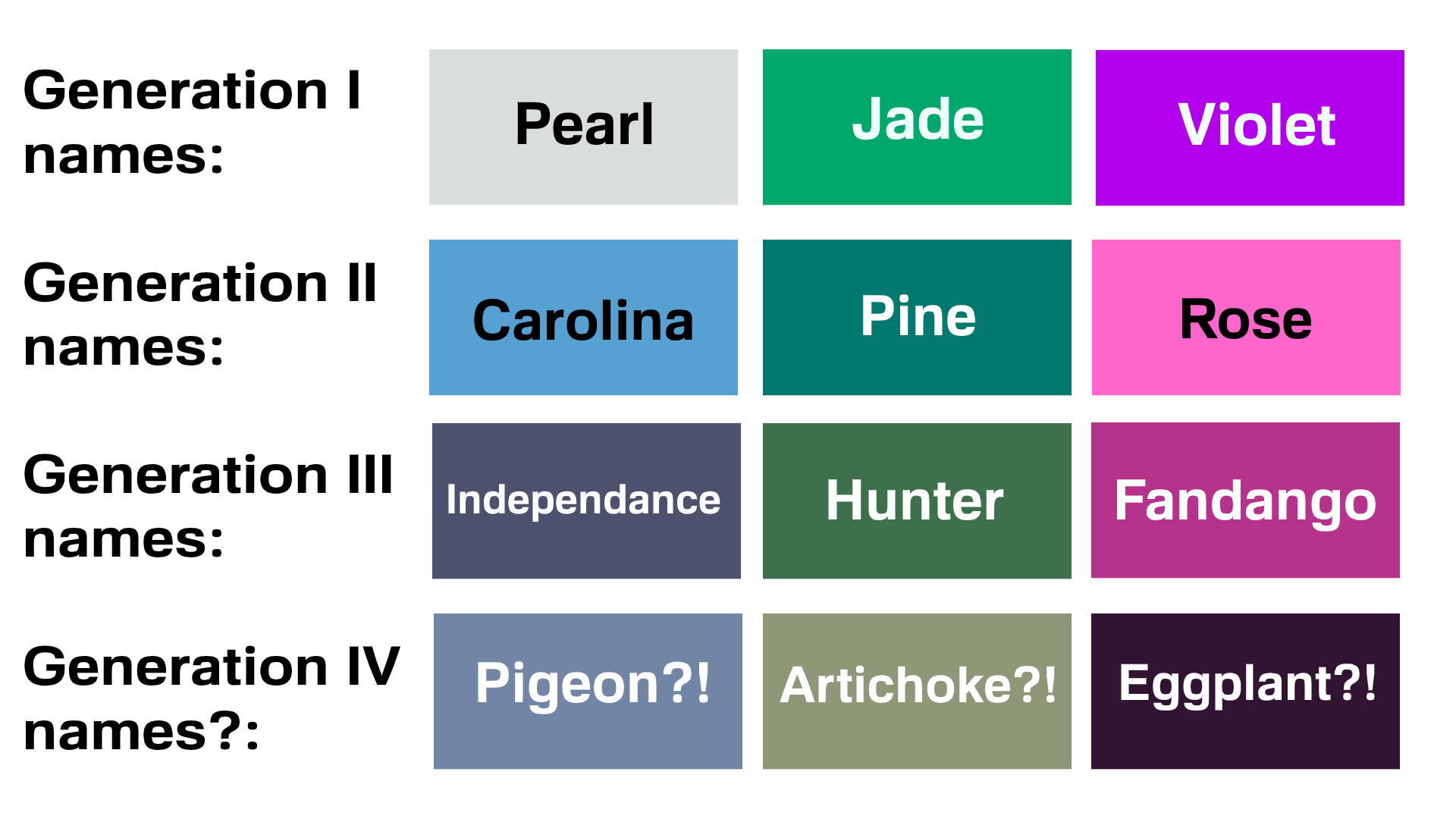 Somewhere in the desert, Vacuo.

Young parents all across Remnant are growing more and more unnerved, as the dream of a new and unique name for their newborn is slowly becoming impossible.

The Color Naming Rule, created after the great war by the Valean peace emissary Montgomery Colór, states that it is heavily recommended for all children to have a first or last name after a color, or at least something with heavy implication of it. Although decades have passed after the Vytal Peace Accords, none really questioned them, as naming children after colors was seen as trendy. Eventually, the recommendation turned to a demand, as non-color names became more and more unpopular. Today, for those few poor souls with regular sounding names, it is increasingly more difficult to find a job, or, Gods forbid, survive middle school.

Naturally, parents wishing the best for their kids will name them after a color. However, you can only have so many kids named Pearl, Rose or Scarlet. Thus, less commonly-heard color names started cropping up: Iris, Cobalt, Umber. Then, the older names were seen as old-fashioned and the new ones were filling up, we started getting Basils, Periwinkles and Sepias. Come on, #3 most popular boy’s name last year was Butterscotch (Scott for short)… And now, a problem for creative parents arose. There’s basically no new color names left.

We spoke with some young parents on what they thought of this situation. Heather Sky, a woman belonging to the Kenyte tribe of Vacuo, spoke about her difficulties: “Among the traditions of our tribe, one of the most important ones is to name our child after whatever is the first thing the mother looks at, after holding her child. Usually, it’s something like an animal or a bush, but lately those got scarce, so it’s either the Grimm or the sand. We’ve run out of all possibilities for the variations of the color black and we’re running out for yellow too. Fortunately, there weren’t any Grimm around when my son was born, but there was a lot of sand and barely any plantlife… I didn’t want my son to be the third Butterscotch of the tribe, so I settled for something almost as good. Oh! Come here! Smile to the reporter, Dandelion!

We wish Heather and her son Dandelion the best in surviving the awful Vacuan desert and the upcoming hell that is going to be middle-school.