My Mom Bought Some Dust So I Will Review Different Types 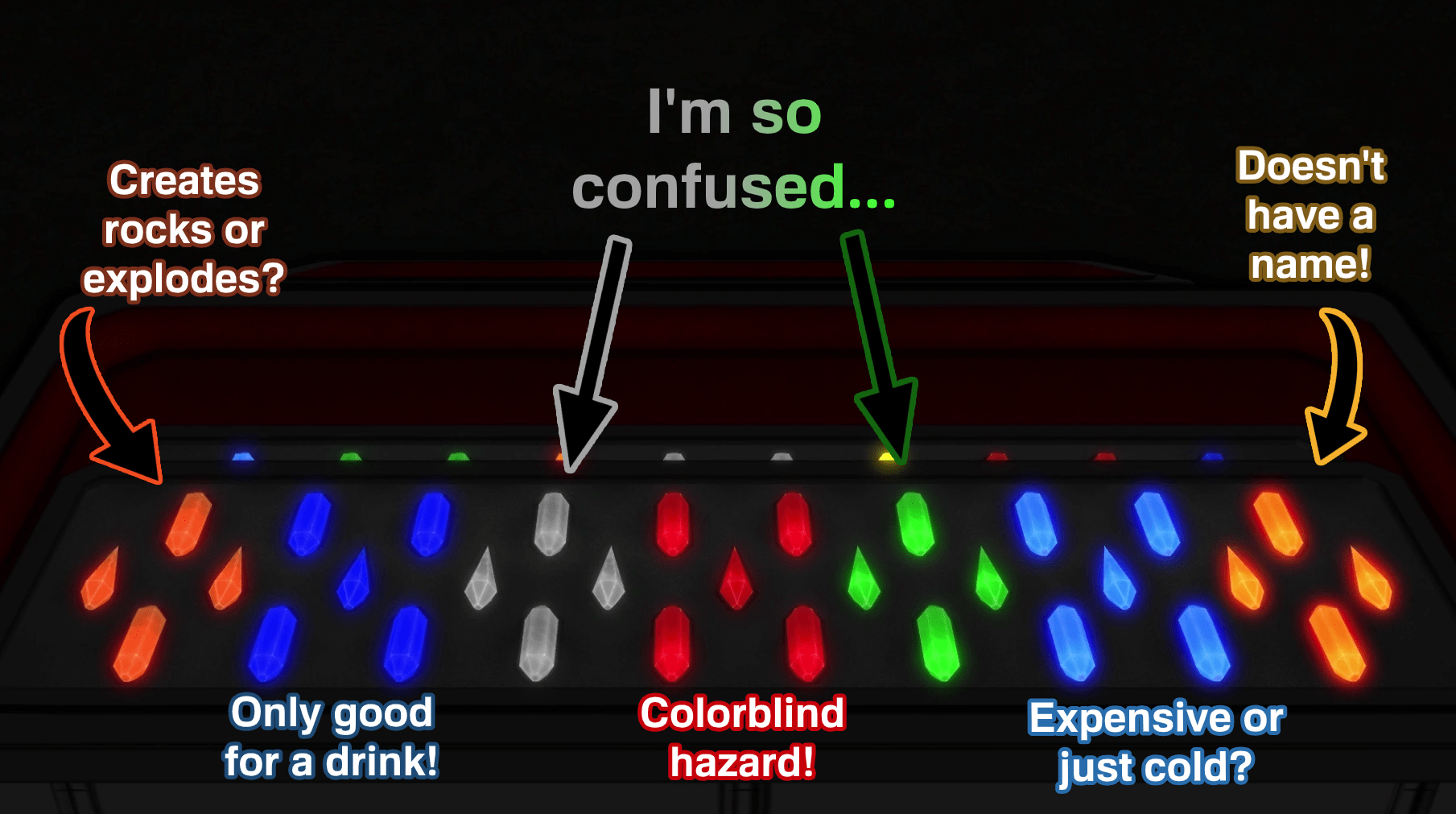 Hello everyone, Ash here writing from Shade Academy. After my mom saw my report on Dust expenditure from fighting Headmaster Theodore, she sent a care package of different types of Dust. Sadly she did not know what type of dust I need so she bought a little bit of everything. For it not to go to waste, I decided to give a quick review of each Dust type. I’ll be conducting this important journalistic endeavor with two of my teammates from team BANG, Bailey Lupis and Nicolle Metaphys.

First of all, here is a metal container full of Red powdered Dust. Fire (or Burn) Dust is used mainly to create fire in various forms, such as fireballs and firearms. I use it to create trail of fire with my semblance, hoping someone won’t be paying enough attention and just step into a bright line of fire behind me. Nicolle tasted the Fire dust and said that “it tastes like burning.” After we got Nicolle some mouthwash, Bailey explained that she hates Fire Dust the most, since she can’t differentiate between the red and green crystals, which makes them super dangerous. I think it’s because she’s a dog Faunus, but I don’t want to seem inconsiderate, so I’ll stay quiet.

Speaking of green crystals, here we have a big green one in a metal container. At first I was unsure if it was Wind or Plant Dust as different companies use different colors for Dust. After a quick test and hacking away the vines out of my room I can confirm it was a plant crystal. Will save for when I visit home to use it in mom’s garden. Bailey mentioned the last time she used Plant Dust, her flamethrower became a flower thrower, but at least the Grimm were pleasantly surprised by the sentiment. Nicolle said that this particular crystal tastes like salad and dirt, and that “she has had worse.”

Next we have white powdered Dust in a jar. Since the previous one was Plant my guess was this had to be Wind (or Air) Dust, however I still have to check if I am right. Not to mention, sometimes Rock Dust glows white, which confuses me even further! Make up your mind, Dusts! Anyway, after blowing Nicolle out the window, I can confirm the white Dust with slight tinge of green is Wind. It can be used to create wind in various forms, such as gusts and tornadoes. Mixing with my semblance I can achieve flight (if you would call me spinning uncontrollably in the air as “flying”). Bailey mentioned that she likes Wind dust, as it helps blow away enemies or people in lines, which I don’t think is legal. Nicolle couldn’t make it in time for the taste test, she was walking back to the Academy dorms.

Next on the list we have two similar sized crystals – one Black and one Purple. Why am I reviewing two different Dust crystals at same time? Well that because both are Gravity Dust – used to manipulate gravitational fields. Personally I use it to slow down foes when I am being chased. Headmaster Theodore uses it in his gloves so your face is attracted to them when he punches. As for two colors being sent – my mom probably thought they were different kinds. Does not help that sometimes Gravity Dust is mislabeled as “Metal Dust”. That naming probably came because when mixing Gravity Dust with Electricity Dust you create a magnetic effect. Bailey said she doesn’t like Gravity Dust much – it’s less useful to attract enemies than to repel them. Nicolle came back but she didn’t want to taste Gravity Dust – it attracts all sorts of small objects to her teeth then.

This leads us to our next Dust – Electricity (or Lightning) Dust. The ones I was sent were little yellow shards inside a plastic, non-conductive box. Electricity Dust can be used to generate electricity in forms such as bolts of lightning and electrical currents. In smaller charges can be used to stun targets safely. Guess they are in such small chunks to use as batteries. But if you do decide to use them in such a way do check if the device has been made to receive Dust! Many students have blown up their Scrolls in such a way (me included). Personally I don’t use Electricity Dust much – I tend to shock myself by accident. Nicolle tasted Electricity Dust, but we couldn’t hear what she was saying, her teeth were chattering too much.

Next up we have two similar crystals again – both orange in color, just one dark, the other very bright. Unlike with Gravity Dust these are two entirely different kinds and I include both here as a warning to not mix them up. Dark orange is Rock (or Earth) Dust and can be used to create rocks – either for barriers or projectiles. Annoyingly Rock Dust sometimes decides to glow white, leading to further confusion with Wind Dust. As for the bright orange Dust it is just known as that – Bright Orange Dust. Guessing it is a rather new, artificial kind as it has no proper name yet and it’s used to make fiery projectiles. Personally I have only used Rock Dust to create defensive walls or trap foes inside a makeshift rock cage. Bailey said she calls the Bright Orange Dust ‘Bang Dust’, but that’s probably because she wants everyone to know she’s our team leader. Nicolle tasted Rock dust and surprisingly her teeth began to shine a bright white! While she was checking them out, I hid the Bang Dust, because it’d probably blow out Nicolle’s new shiny teeth right out.

Next we have is a big chunk of light blue colored crystal stamped with Schnee family symbol. This is Ice Dust, used to create ice in any shape and is formed by the combination of Water and Wind Dust. Guess my mom won it in some SDC contest. I’ll keep it on my desk as trophy. Bailey recommended me to use it as a way to keep drinks cold in Vaccuo.

Next one is a tiny tiny cyan colored crystal inside a glass test tube. This is Hard-Light Dust – rarest and most expensive kind of Dust. Can be used to form solid objects made of light energy or to just shoot laser beams. I have not had the chance to test it out with my semblance yet as it is too expensive to afford. Honestly I had mistaken the previously mentioned Ice crystal for Hard-Light (one is light blue, the other cyan) and almost fainted thinking my mom sold her house to get so much of that expensive thing. All three of us looked at it in awe, afraid to open the tube.

Water Dust – can be used to create water. I can use it with my semblance to walk around particularly sad people and form a little rain cloud above them. This blue colored Dust came in a grainy form inside of a regular water bottle – just hope somebody won’t mistake it for drink. We didn’t let Nicolle drink it – choking hazard.

That is all for my review. Hope you enjoyed it and please let me know if you like these kinds of articles. In the the end, remember to sort and label your Dust! Your colorblind Faunus teammates will thank you!

Editor’s note: vytal_news does not recommend any readers to taste or eat Dust without an explicit permission from their doctor.

An interesting fact about dust is it many uses. Like in the fingertips of arm prosthesis usually have a gravity dust alloy. To allow the user to more easily pick up items, because that is one of the challenges of creating a good arm prosthesis.

Thank you, will suggest this for my teammate – she should find this very useful

This is one of the many things that you learn while having your dad as a atlesian scientist that is specialized in dust. While also being a part time scientist