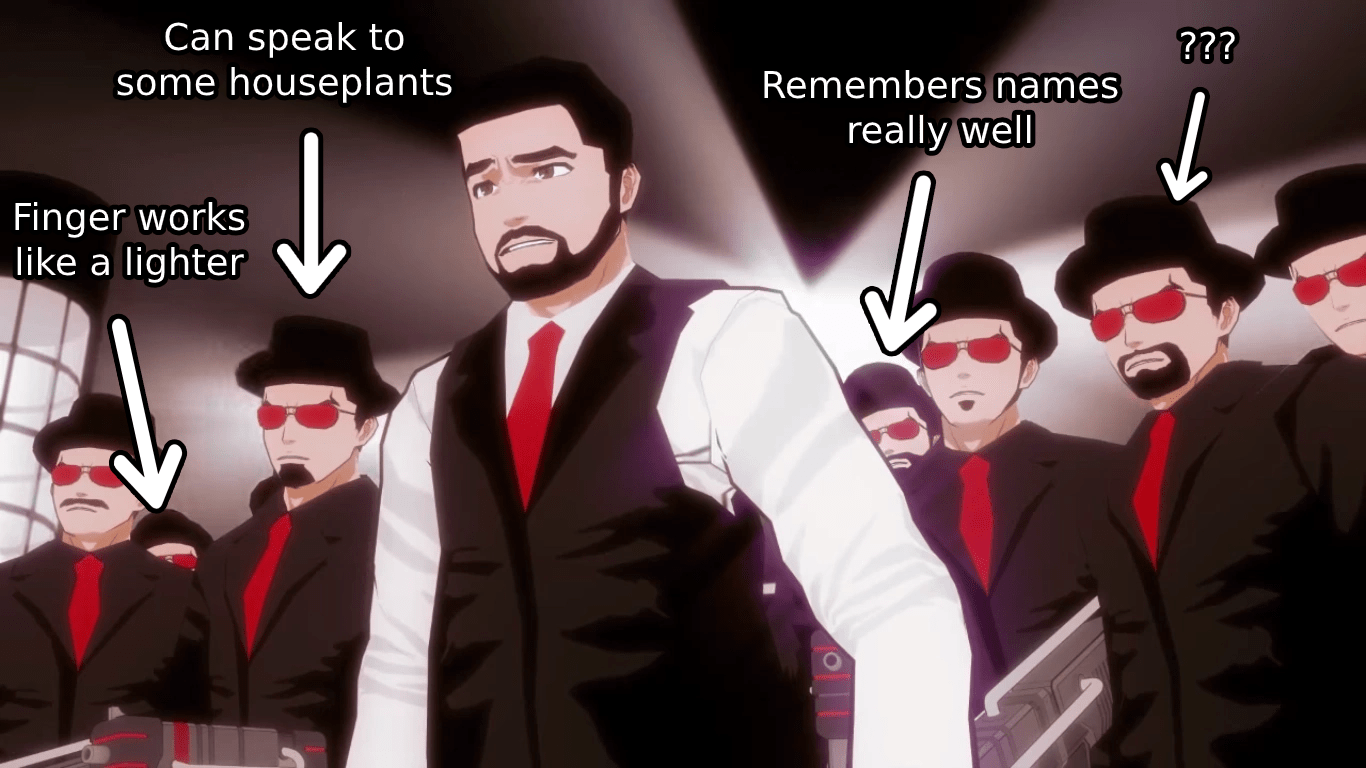 A good henchman is a rare find. A good henchmen with a useful semblance is a next-to-impossible one.

Is it too much for a club owner/attractive local entrepreneur to ask? A henchman with a semblance that wouldn’t get beaten by a first-year huntsman academy student? I know what you’re typing, that I don’t “respect” my henchmen, that they shouldn’t be fighting for their lives against trained fighters. And you know what? I agree. But darn it, those kids still come into my bars and destroy my property, and at the end of the day – what else is a henchman for?

Some of the greatest legends in the underground circles have had absolutely bonkers semblances. Tock, mercenary with hundreds of successful missions, had invulnerability as a semblance. Marcus Black, famed assassin – semblance locking. Tyrian Callows, serial killer with a massive body count – he touches your aura and it’s gone. Now, all of these unsavory individuals aren’t exactly what I am looking for in a henchman (the qualities I am looking for are: undying loyalty, punctuality and sharp fashion sense), but they could have never become the best in their field without their semblances.

But hey, maybe my own henchmen could prove it. Take Blaine, one of my best men. He can expunge alcohol from his body really quickly. I think it’s through sweat, but I’ve never come close to finding out. Creepy, nasty, uncomfortable? Yes. Of any use in a fight? Nope. How about Carl? He can rapidly and precisely screw in screws with his fingers! Neat! Awesome in construction and repair jobs, not so great when a blondie with fire-whatever destroys the nightclub. And don’t get me started on Russel – his semblance is that he forgets he has a bloody semblance!

I have compiled a list of semblances that I am looking for and willing to pay a 12% extra to any applicant possessing them:

Everyone interested should contact Junior (me) at my club in Vale’s industrial district. Knock loudly, we keep our doors closed from teenagers and the Grimm.

Just figured out what your problem really is, Hei Xiong: that weapon/wardrobe/semblance 3-in-1 you’ve been sourcing from was a White Fang front and that edgeweeb Taurus guy got dibs on everything but your boys’ stylin’ eyebrow transplants. I recommend poaching from Haven Academy; they’re sorta totally emptied of staff with moral fiber at the moment.