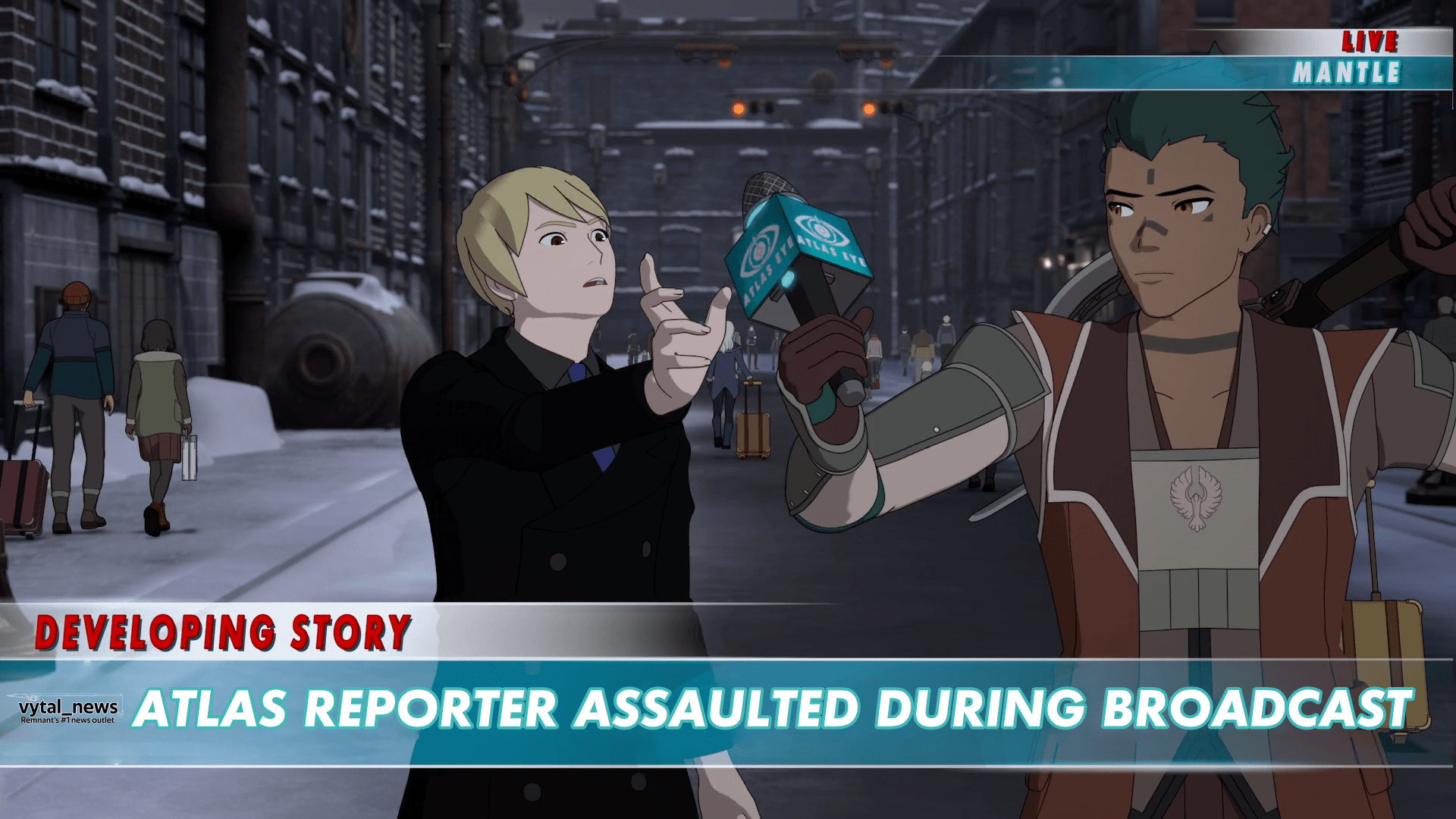 After assaulting the innocent reporter, Joanna took over the broadcast and spewed anti-Atlas propaganda, claiming “General Ironwood has abandoned you,” which is blatantly false information as the General merely recalled his troops to re-group them and prepare for the incoming Grimm attack. The terrorist then continued, “but we have not!” referring to the election loser Robyn Hill and her Happy Huntresses, a terrorist-aligned group bent on taking down Atlas, of which Joanna is a part of. She then instructed Mantle citizens to move into the crater beneath Atlas, no doubt to recruit them into their ranks and sow further chaos down in Mantle.

After she was done indoctrinating the masses, Joanna violently shoved the microphone into Rick Schwarz’s chest, possibly inflicting severe blunt trauma. The broadcast was then ended, most likely due to the reporter suffering extreme pain and/or internal bleeding.

We could not reach reporter Rick Schwarz at this time, however, we talked to our own expert reporter Bianca Aurumvale about this incident: “Rick Schwarz is pretty-much a nobody, no Huntsman training, no reporting accolades or achievements. He’s only known for his silly pro-Mantle stance, and you can see where it got him.” When asked if Rick Schwarz has done anything significant in his reporting career prior to the assault, Bianca responded bluntly: “Not really, I suppose he dresses sharply and that’s it. Even his constant advertising of his network got on my nerves. Still, what happened to him is incredibly awful, I wouldn’t wish it on the worst reporter. I mean, if the people start attacking the press, no reporter apart from me will ever feel safe out in the street. Clearly, reporters will stop doing their job out of fear and press as a whole will be destroyed. How will the people learn new information then? We know there’s no one left to trust, if we don’t trust the media (editor’s note: and General Ironwood).

Bianca continued speaking unprompted: “Now if that Joanna would ever interrupt my broadcast, I’d beat her up so bad she’d go home with that spear as a crutch. It’s one thing to pick on a civvy, and another to go hand to hand with a trained Huntress! We graduated at the same time and even during those days I could take on her entire ugly team all by…” Bianca then went on a lengthy tirade about her days in the Atlas Academy, followed by how terribly the Happy Huntresses dress.

This particular violent outburst follows the mass riots in Mantle, which started after Jacques Schnee rigged the Council Seat election and subsequently turned off the heating grid for the entire city. As people in Mantle are freezing and being viciously attacked by Grimm and Happy Huntress alike, there is only one hope for them – looking forward to General Ironwood’s guiding words and distant moral support.

This concerned citizen would mainly love to know how on Remnant those Grumpy Huntresses use their double-ended halberd bow things. Ms(?) Greenleaf’s apparel outfitter would also be great since that is one fine coat.