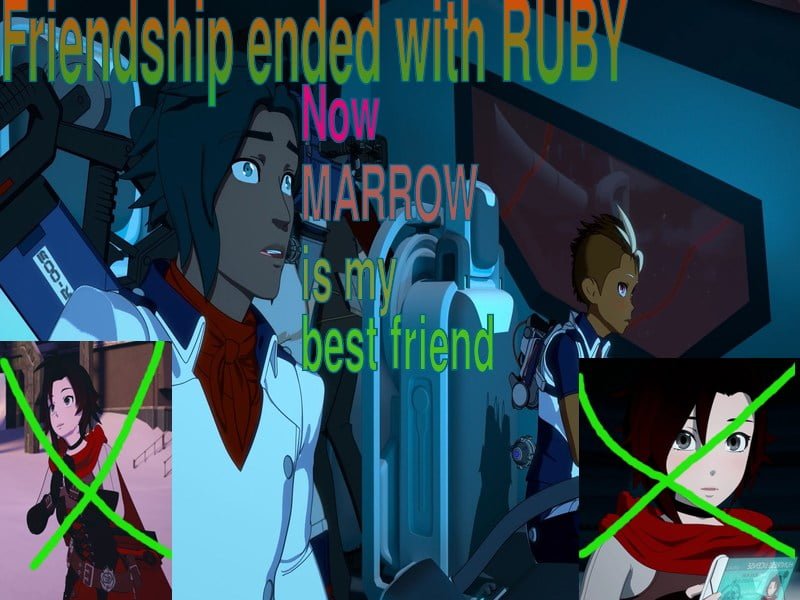 A fascinating and incredible ScrollShare post has graced us this morning. An Ace-Ops operative Harriet Bree has shared an image collage, detailing that her “friendship ended with RUBY”[sic] At least for now, it seems that Harriet’s Ace-Ops partner Marrow is her new best friend.

The image, which appears to be either hastily put together or under the influence of a lot of emotions (perhaps even both!), has gathered surprising amounts of social media attention, with people lamenting the friendship they never knew existed and some questioning what actually happened and why this almost-sisterly bond was shattered. In the post Harriet explains her ex-friend Ruby Rose became “selfish”, “Proudy” and even has shown “Attitude.” Doubtlessly, this betrayal by her friend was unexpected and shocking for Harriet, who spent little time actually explaining why her new best friend was Marrow (apart from the possibly racist joke, which I will choose to ignore.)

The post was being shared all over Atlas and Mantle all throughout the day, while friends and strangers alike were offering advice. User “Cinder_2u” took Harriet’s side, writing: “She wasn’t good enough to you, Ruby is THE WORST 🔥🔥🔥.” Another one of the Ace-Ops, Vine Zeki, chose a more middle-ground stance, writing: “One should not be in haste, when passing judgement or burning a bridge. I do hope your friendship can blossom once again, after Ms. Rose’s charges for treason are cleared.”

Harriet and Ruby were not available for comments at the time of the filing of the story.