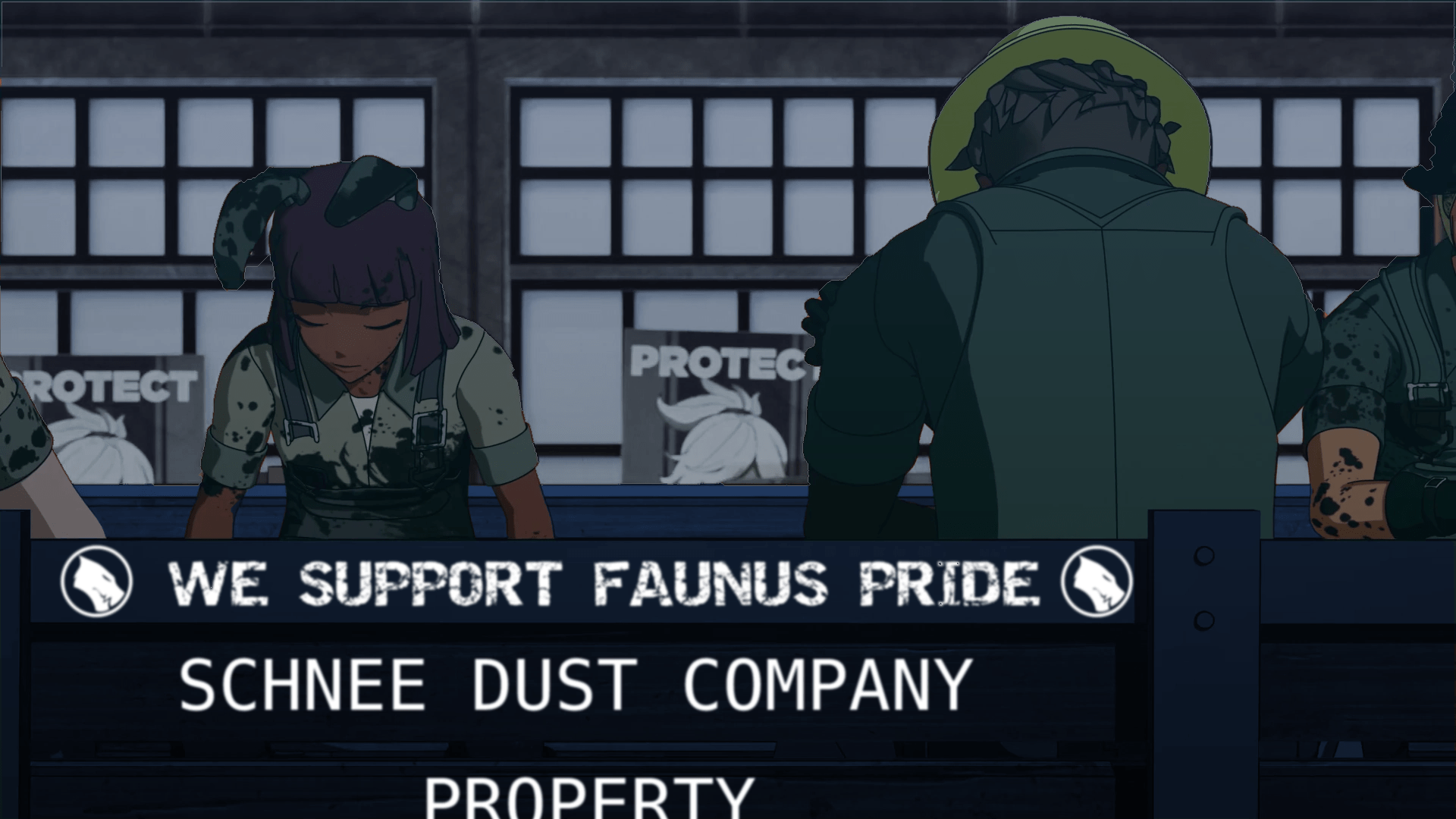 At this time of year Remnant celebrates Faunus Pride Month in various ways. Although originally the month was chosen to highlight the impact that Faunus have had on society as a whole throughout history, both their accomplishments and the unjust treatment they face, companies have quickly taken to this month to support Faunus workers and consumers and even profit out of that. Even vytal_news have agreed to highlight articles published by Faunus authors this month. Unfortunately, I am the only Faunus in the writing staff. Other companies take even fewer steps by changing their social profile picture to include the original White Fang logo or just its colors blue and white. Exactly 30 days later the profile picture turns back to regular, with Faunus being left without a single mention for another 11 months. But no corporation has done anything as transparently greedy as the notoriously anti-Faunus Schnee Dust Company.

The Schnee Dust Company, worth billions of Lien, hasn’t stopped actively participating even after it’s current owner Jacques Schnee mysteriously disappeared. Still, a radical change in the company’s organizational structure didn’t change the fact that for decades the largest Dust exporter in Remnant has consistently abused its mostly-Faunus workforce with terrible pay, awful workload and discriminatory attitude. They also sponsored anti-Faunus politicians, including the aforementioned Jacques Schnee. It appears, however, that they hope you forget all that when they change their profile picture to blue and type out a hollow sentiment on ScrollShare.

The comment quickly garnered negative attention, as Dust mining is the profession that is most associated with the mistreatment of the Faunus working force. A comment from ScrollShare user HornedAndReady “First they kill us in their mines and now they mock us?!” has quickly gotten support from fellow commenters, as did others, mocking the atrocious editing work on the helmet and the use of the hashtag #SDCProud.

Representative of the Mistral branch of the SDC, Amanda Winters, apologized for the message. Or as close to an apology as we’ll get. “We are deeply sorry to anyone who was offended by the post on ScrollShare. It was never our intent for our customers and workers to misinterpret our message as offensive to Faunus.” Later, she added: “Originally the helmet was adorned with horns and ears of various animals to better symbolize Faunus heritage, but after initial tests we had to remove them as the workers kept getting their antlers stuck in the mining caves.” In the video attached to the apology, the SDC representative almost showed human emotion.

“Finally, the message did not communicate that we intend to donate 15% of the profits from these helmets to Menagerie hospitals and schools. You can purchase your own White-Fang-Blue mining helmet and show support for the Faunus Pride right now. Starting at 399 Lien, without tax.”

Whitley’s trying his best ok!? He’s new To this!