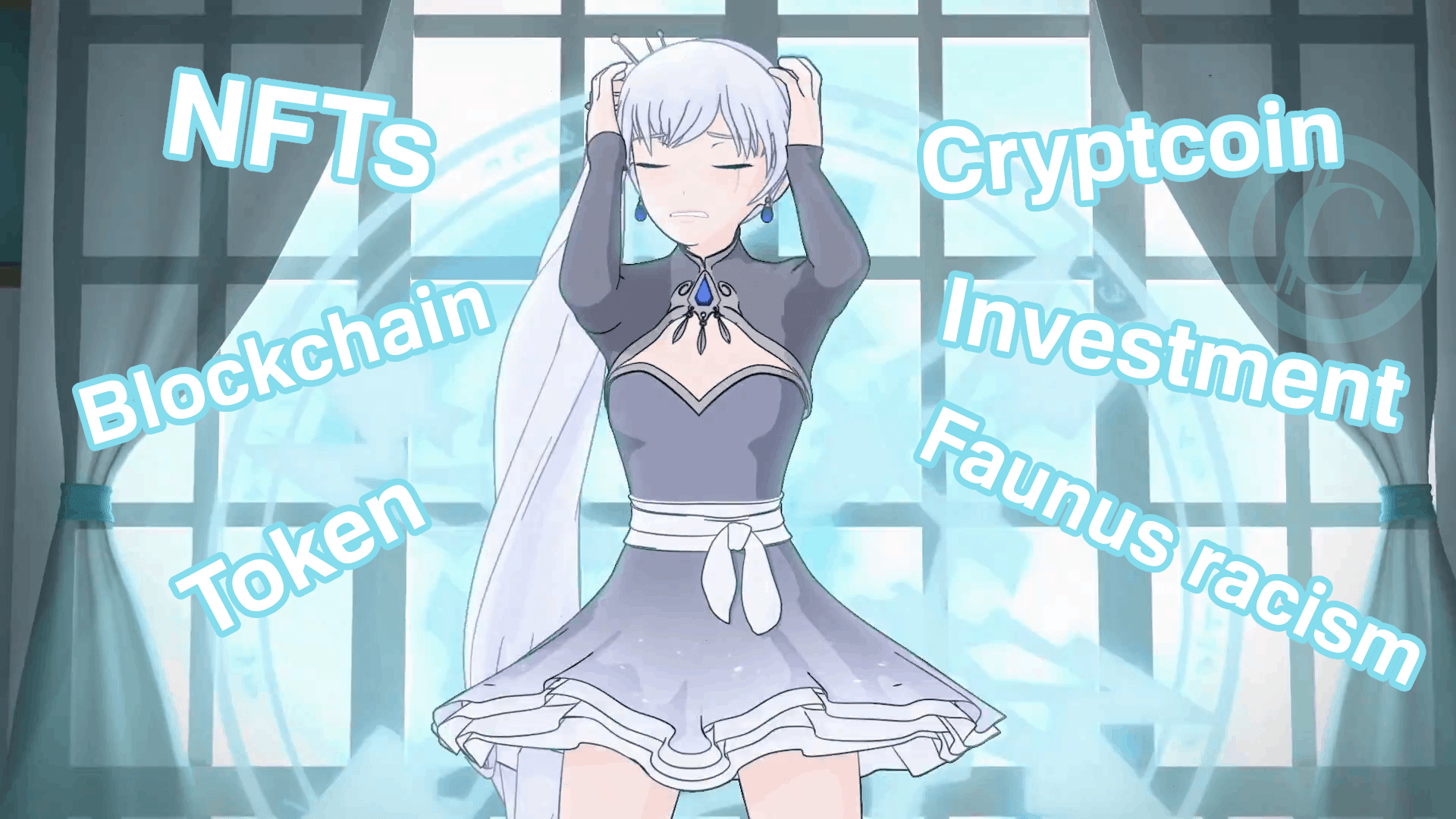 Everyone’s scrolls in the past few weeks have been abuzz about the new fad that’s been sweeping all over Remnant – NFTs. What are they, where do they come from, what are their risks and why are they so racist against Faunus? All of these questions will be answered by vytal_news, nominated as the most professional, and only one remaining, news organization from Atlas.

NFT stands for Non-Faunus Token. It is a digital identifier that is stored on a blockchain. NFTs are used to certify authenticity and ownership of something, usually a virtual certificate that proves that a person is, without a doubt, not a Faunus. Transactions involving NFTs are usually done in Cryptcoin.

Alright, alright. Seems like a short history lesson is in order. Cryptcoin was invented several years back by the mysterious and anonymous person named Marakaito. All we know about them is that they’re from Mistral and it’s definitely not their real name. It was devised as a virtual currency, meaning it could only be used by scrolls and transmitted via the CCT network. Another selling point was that it did not belong to any Kingdom, so, unlike Lien, couldn’t be taxed. That, and its trendy marketing of being a C encased in a spiderweb, made it appealing to tech-savvy and criminally-minded people. All of Cryptcoin transactions are stored on a virtual blockchain.

Most of our readers will know what a blockchain is, but for those of you from Atlas (or those that skipped history lessons), blockchain is a historic tradition in Vale, Vacuo and Mistral, that predates the Great War by several centuries. Highborn people of the time had difficulty proving that they were indeed highborn and not just some richer commoners to other houses from different Kingdoms. The way it worked was whenever a patriarch or matriarch of a high house decided to immortalize their legacy, they had a plate of metal forged and decorated, then finally engraved in their name. They would attach a chain to it and hand it over to their oldest son or daughter. The child, after growing up and being recognized in Remnant for their deeds, would forge another plate, engrave it and attach the same chain, linking their plate to their ancestor’s, then gifting the heirloom to their child and so on. This process and the end result itself would be named platechain, for the two main components in the item – the plates of your and your forbearers names (and sometimes deeds) and the chain linking them all together. Over time, descendants lost sight of what made this tradition important and would begin to commission exceedingly fancier and more ornate plates, vainly hoping to outdo their ancestors. Eventually the flat metal plates became full blocks of steel, gold or whatever else the house would fancy. Thus, the name morphed into blockchain and the tradition was only kept up by the most noble families in the three Kingdoms. The blockchain tradition was largely abandoned when blockchains eventually became far too heavy for anyone to move and, more suddenly, when the global metal shortage hit Remnant during the Great War.

…Okay. And why the Faunus discrimination?

It is speculated that just like Cryptcoin, NFTs originated from Mistral, perhaps also created by Marakaito. In the less reputable streets of Mistral, there has been a growing anti-Faunus movement, especially after the failed White Fang attack against the Haven Academy. And although it was stopped by mostly Faunus themselves from Menagerie, it did little to help against the fearmongering and hatred that is being riled up there by those willing to seek extra profit. And out of this social unrest come NFTs, created and marketed as a way to fully distinguish humans from Faunus. Turns out, one of the more popular arguments of the anti-Faunus rhetoric is the fact that some of Faunus can easily blend in with humans through their non-obvious Faunus traits. This has some people worried so much that they’re willing to buy these Non-Faunus Tokens, which are represented by a crudely-drawn human. Some shadier bars and shops in Mistral already demand everyone entering to show their NFTs.

If NFTs would just be confined to Mistral’s unlit streets and sewers, there wouldn’t be an article. Unfortunately, because this is the next big craze in Scrollshare, thousands of people are already buying into NFTs without knowing the real reason they were created. Marketers and trend-setters now claim it is a way to ‘own your ancestry’ and ‘reminisce about your familial traditions’ without mentioning that blockchains themselves were prejudiced against Faunus as well – there are no records of a Faunus ever owning a blockchain in history. Some are so ready to jump into this new fad that they spend thousands of Lien just to own an NFT just because someone said they will be more expensive in the future!

So who wins from all of this? Clearly, the only winner is Marakaito and their Cryptcoin empire, as well as all of the money-launderers in Mistral. Be aware, reader, and don’t buy into Non-Faunus Tokens.