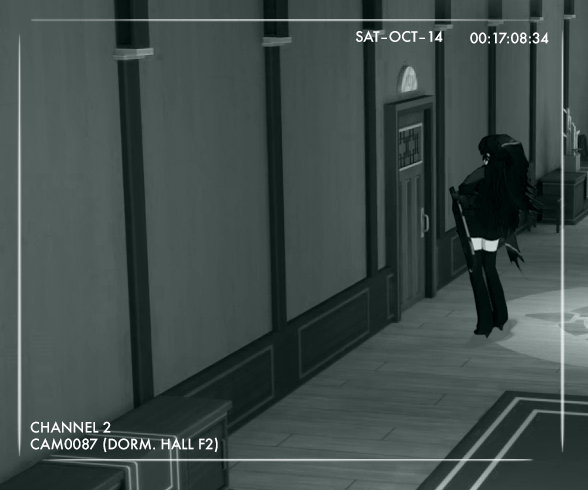 Did you know that known Branwen bandit tribe leader Raven Branwen allegedly housed herself in Haven Academy days before the attack? It’s true! She’s gone now, just out of sight. Always out of sight.

Because most cameras – and people – don’t see her, authorities were completely unaware that this woman was allegedly related to the attacks in the Academy. This was brought to light by fourth year Huntress-in-training Arslan Altan, who naturally was shocked when she found that her team’s dorm room had been used by the bandit.

“Haven has the largest campus of the four Huntsmen Academies,” she later spoke in an interview with one of our Mistral reporters, “Each dorm has private room for each student. I don’t see a reason to blame the authorities for missing these details during a search, but I don’t condone the fact they didn’t search the institution multiple times.”

As explained off-camera, the ‘Golden Lion of Haven’ and her team – along with the crowd favorite Team SSSN – were on the academy’s semester break when they had heard about the White Fang’s attack. The two teams raced back to their home only to find the battle had already passed. Arslan stated that they plan to finish their studies in Shade Academy.

After examining various recently opened wine bottles and a used bed covered in feathers, the Mistral City Police once again searched through the cameras in Haven’s dorms, where they discovered that a bird had flown inside and transformed itself into Raven Branwen.

With this information, we can build a profile on a new type of Semblances; which are currently dubbed as transformation types. Raven, like several other students, had kept her Semblance hidden away during her years at Beacon Academy, but this revelation explains how she was able to make such quick getaways from her missions, or even how she disappeared from her (short) family life without a trace.

The Mistral Council reported to have been readying an attack on the Branwen Tribe camp for weeks, only to find it abandoned. This news is suffice enough to conclude that the Branwen bandit tribe had been in league with the attacks conducted by the groups affiliated in the Fall of Beacon.

A manhunt on Raven will be launched in the coming days, as she must know something. She must know secrets, some very vague yet important knowledge about the Academies which we do not know, maybe she had a purpose in them leading to her alliances with the terrorist group. And now, on the verge of these revelations, she’s gone again.

On the plus side, she had a purpose which is more than a lot of us can say.

Oh, and I almost forgot! I wonder how the Semblance even works, we hardly even see physically altering Semblances, and most of them don’t even change you THAT much? In fact, how do her clothing and weapons not get affected by her Semblance? I doubt I’ll ever see a crow swinging a greatsword around, that’d be crazy!