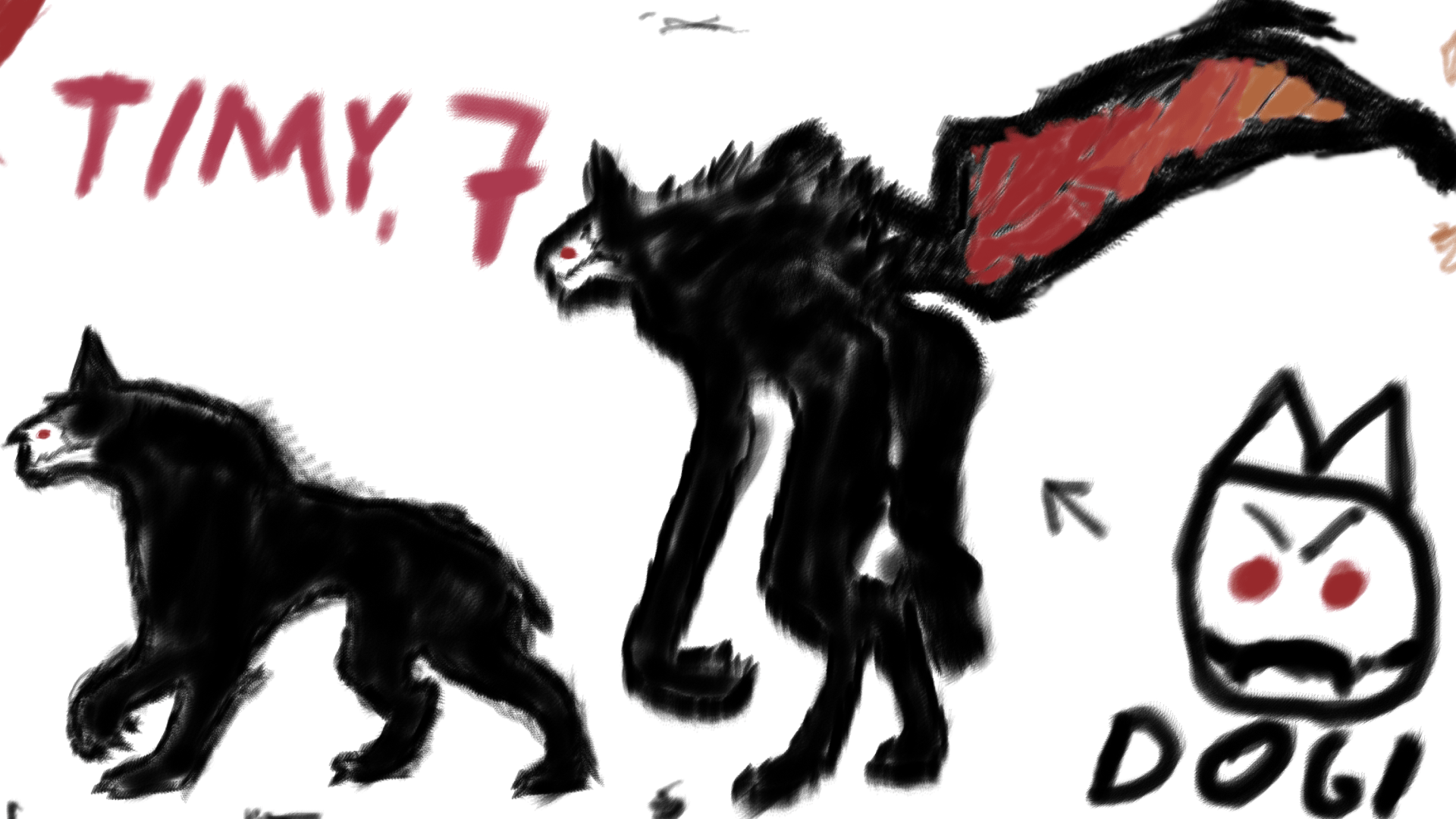 The annual Grimm Design contest, hosted by the non-profit organization Grimm Relief of Remnant (GRR) has concluded, announcing a very young winner. Timmy, age 7, captivated the hearts of many voters with his drawing, featuring an upright and all-fours versions of the same design and an unfortunate spelling error of his own name.

The GRR organize a Grimm Design competition each year to raise awareness of Grimm attack victims and pressure the councils to invest more in not only huntsman protection, but care for the affected and their relatives. This tradition started nine years ago with a tagline: “Let’s be glad at least these Grimm are made up!” and has received positive attention from media, citizens and participants. Unfortunately, the tagline later had to be changed, as six out of eight previous contest-winning designs actually turned out to be real, later found by scientists or huntsmen. It is yet unknown whether the winners were inspired by real life or that the Grimm take shape based on what the public is afraid of. Some others claim it is only a coincidence and that the Grimm aren’t researched enough to properly document all their forms. One thing’s for sure, we shouldn’t worry about this particular Grimm appearing any time soon.

The GRR founder and president Gertrude Raisins announced the winner today in a ScrollShare post: “We here at Grimm Relief of Remnant congratulate the winner of this year’s Grimm Design Contest, Timmy P.! Timmy’s drawing, made with crayons, pencils, charcoal and whatever else he had around is certainly both cute and creepy, but many of us were more captivated by his story, as both of his parents were mauled by Beowolves just a couple of weeks ago! We certainly can see how Timmy’s creation ‘Dogi’ was inspired by this traumatic event! As for this year’s prize, Timmy has earned himself and one other lucky person an all-expenses paid tour of the scenic Beacon Academy ruins, guided by an actual Hunstman or Huntress! Congratulations to Timmy and a heartfelt thanks to everyone who participated!”

We managed to track down Timmy in his school in Mistral and asked him about the contest. “My uncle told me to participate and think up a cool Grimm and I did and it was so fun!” the winner told our reporter, while wiping his face with hands stained by colored markers. “I really like Dogi, he is very scary and very cool and he’s my best friend!” When asked whether Timmy has already thought up a potential set of powers for ‘Dogi’, the child looked confused. After a brief explanation and a snack, he answered: “Dogi is very big and very strong, and uh, he can jump and he can walk on two legs like people (Editor’s note: Beowolves also walk on two legs) and he can, uh, make his hands long and big and he can grow wings and fly and talk very scary and…” After rambling this way for a good minute, it became apparent that Timmy was making everything up as he went along. “Oh and Dogi has no eyes and no mouth but he can eat you if he wants but he is friendly and doesn’t eat kids!” the young artist said, contradicting his own drawing, where the mouth and eyes are clearly visible. Timmy then had to conclude the interview, as it was time for his naptime.