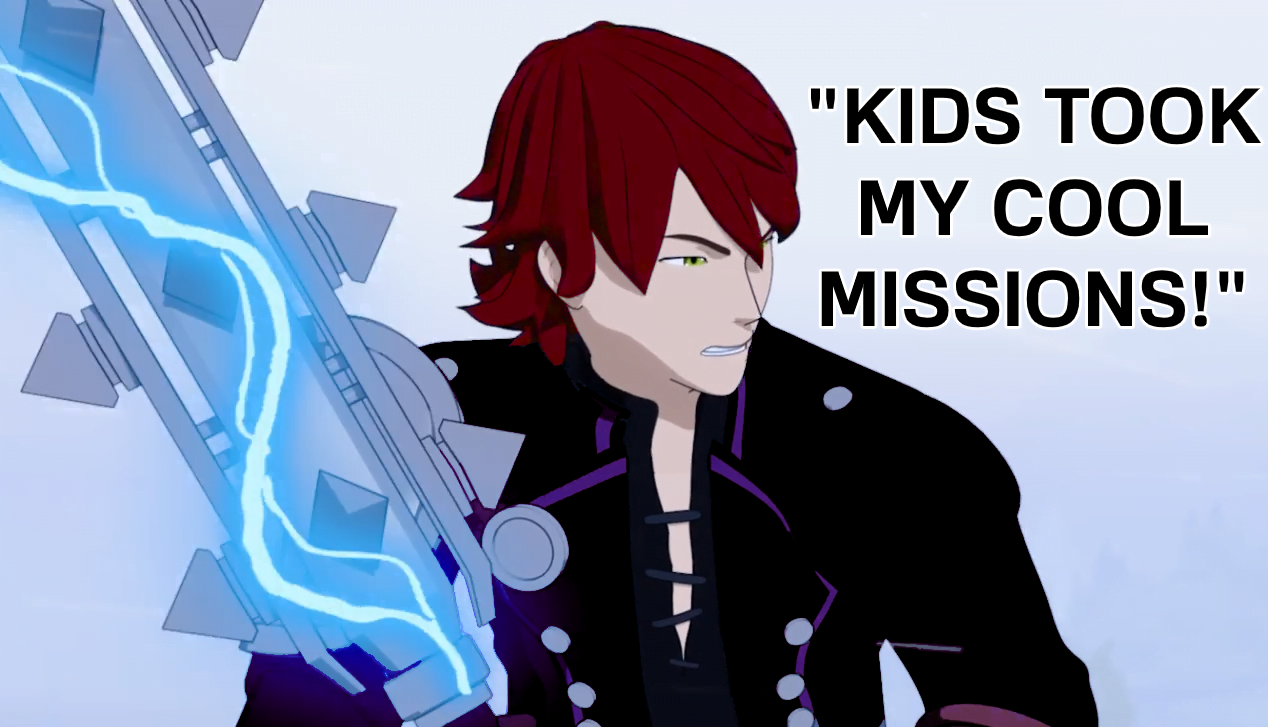 Haven graduate with 7 years of experience, Lucero Flann, is bitter that a bunch of kids can just take all the cool missions for themselves, while he is stuck with border patrol.

“I come back after a gods-awfully boring village patrol mission to south of Kuchinashi and what do I hear? White Fang attacked Haven, my own home turf! While I’m grabbing my electric mace to go and help, I get told they were already stopped, like an hour ago by a bunch of kids from Vale and some unarmed civilians from Menagerie. Excuse me, what?”

Lucero then explained the various missions that licensed huntsman have to undertake.

“You’re lucky if you get a Bounty mission or Search & Destroy. That means you’re catching bad guys or killing Grimm, both pretty fun when not in excess. Escort and Search & Rescue missions aren’t too bad, but they do mean you’re dealing with civilians, which is pretty lame usually. My mace can project lightning bolts, but all little Pearly here is crying about is how much she misses her kitty. Who cares?!”

Lucero took a moment to show off his weapon by surging electricity up to it and short-circuiting a nearby woman’s scroll. After exchanging curses with the passerby, he then continued:

“If you’re real unlucky, you get parameter defense or village security. You barely get any action and just walk around a bunch, fixing some dumb wall. And while I’m doing that, some unlicensed teenagers decide to protect a whole bunch of civilians by crashing a train! I’m a huntsman for how many years and still I haven’t participated in a single train crash, it’s unfair! Then, after I check the mission board, I find only parameter defense and village security missions are left! Turns out they granted all fourth-years their licenses after Haven was attacked, so they all picked out the cool missions. So here I go, walking around Mistral’s walls, checking if terrorists haven’t planted any more bombs.”

Lucero was then informed of the recent events in Argus. He screamed and swung his electric weapon at a lamp post, knocking it down. After profusely apologizing to a nearby city official, he said:

“Those kids fought a giant robot and a leviathan Grimm?! Of course they’re considered heroes, why wouldn’t they?! Some of us walk fourty-seven days to a remote village to fix a blasted wooden wall, while others take all the glory by turning Grimm to stone. This kingdom has no respect for their own, let me tell you.”

Lucero Flann then left the interview, stating he still has to go and find all of his missing huntsman friends.