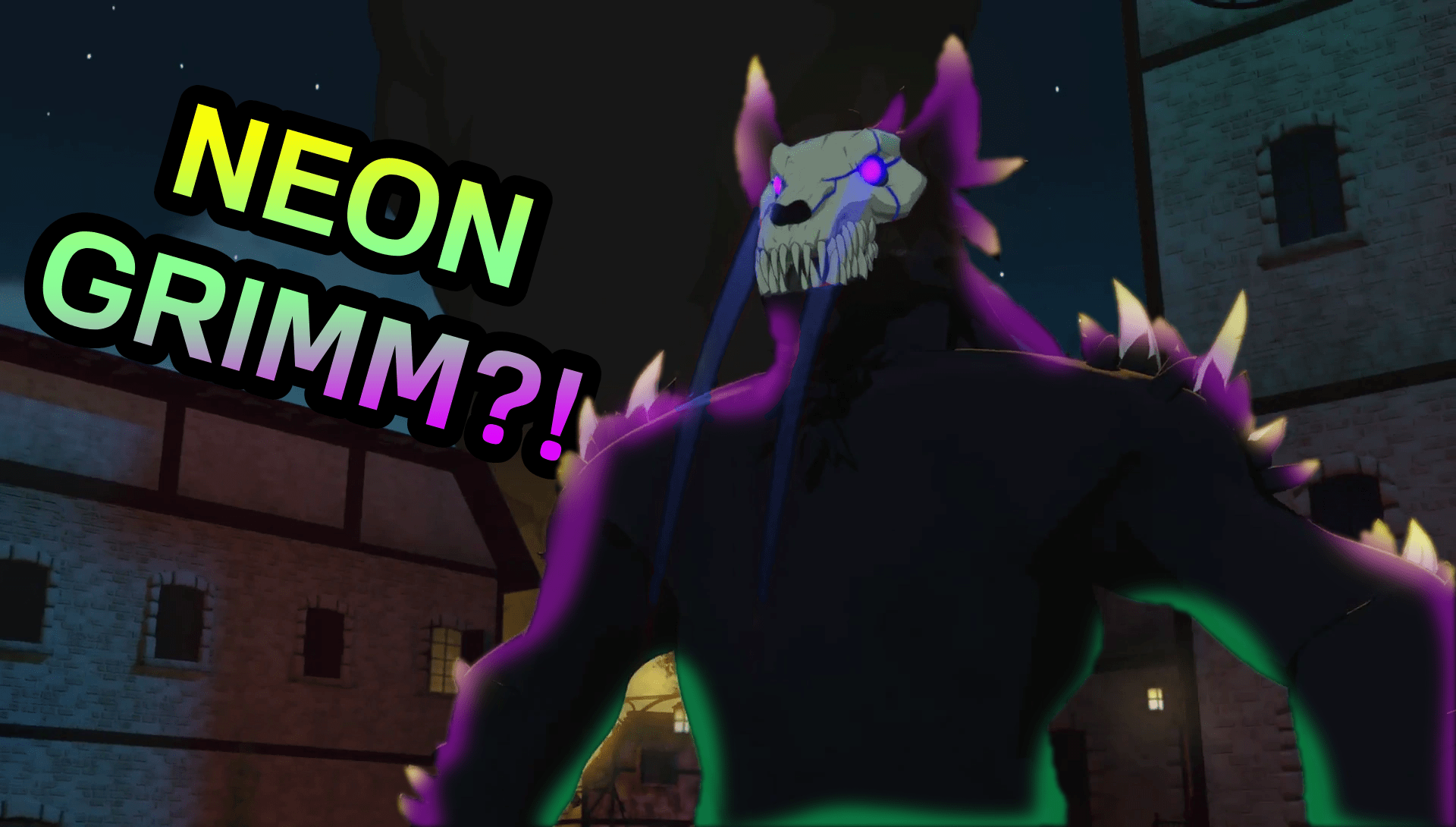 Hello everyone, intern Ash here. Sorry for not writing for so long – Shade is experiencing a huge sandstorm and the signal from here is rather weak. The storm is so bad I can’t even see what’s happening outside – hopefully nobody was stupid enough to go out during this mess. Luckily I was able to get a connection to our main office in Atlas. Weirdly enough I could only hear water-like noises as the camera in scroll chat was off. But hey, servers are still running so I finally could upload my work.

Today’s article is about rumors that might be of concern to huntsmen and huntresses. Not too long ago there had been hearsay about weird looking Grimm popping up. These beasts are easy to differentiate from their brethren due to their weird and colorful appearance. Dubbed “Neon Grimm” by the surviving victims, these beast have mostly been sported in random rural areas near the coast, localized mostly in Menagerie and Argus, but appearances have also been confirmed in Vale and other territories. Initial reports seemed to imply that this new look is to confuse their prey, so they don’t realize that it’s a Grimm and not a parakeet approaching them.

“We were playing hide and seek when I spotted it” says local 9-year-old Potato Gaia. “He was dark blue with some patches of green. Oh and also red stars were all over its body. I wanted to approach the doggy, but it quickly ran off. So I went back to play games.” Huntsmen reports state that the child didn’t realize she had to be afraid of the colorful Grimm, which means that due to a weak emotional response the Neon Grimm didn’t attack her. It figures that someone named Potato Gaia would have thick skin.

“I was able to get away after it bit me, but I didn’t get a good look at it as I was too busy lying down in the bottom of a cliff, surrounded by a pool my of my own blood. I think the beastie was black and blue. Or maybe white and gold? Can’t remember that, or anything much to that matter,” coughed up another local, Jadeson Baker, who is currently being treater in the intensive care unit.

I tried contacting the ever-popular huntress and social media influencer Neon Katt, since she shares her name with the Grimm. Rumor has it that she was the one that spray-painted a bunch of Grimm and nicknamed these Neon Grimm to improve her own brand recognition. However we were unable to reach the young huntress and her current location is unknown.

Despite several sightings, the source of these strange Grimm was a mystery to everyone and their appearance and descriptions varied significantly from every person. Luckily while writing this report I was contacted by our resident Grimm expert/evil scientist – Doctor Merlot. Was this a coincidence or was he spying on my search history – I will never know. His data did shed light on this strange happenings.

“Greetings, Doctor Merlot, haven’t heard from you for…”

After fidgeting a bit with my connection and turning off my teammates’ scrolls I was finally able to get a stronger signal.

“Greetings, Doctor Merlot, haven’t heard from you for long time. Sorry we are experiencing a heavy sandstorm here so the connection is not too stable”

“Greetings my dear and no problem at all, I will be quick like always. Can’t talk long if I don’t want the authorities to trace my location!”

“Why have you contacted vytal_news again? Did you want to continue your interview?”

Merlot stars laughing with the video freezing up from time to time.

“A little bird whispered to me you were looking into those…”

An audible sign/moan can be heard from the self proclaimed God of Grimm.

“You’re not a fan of this subspecies?”

The video freezes up on his shouting expression. Luckily the audio is still working.

“Those are not subspecies dear! Those are lies spread by the uninformed and supporters of the poser Salem!”

“Then what are they?”

“You probably noticed that all the attacks were near coastal settlements. Have you noticed anything that they had in common?”

“Besides them being near large bodies of water?”

“The water is unrelated my child. All those settlements are close to one of “Sticky Honey’s Paint and Sticker Stars” factories. It’s an corporation that mistreats its workers. Seems in that one it got so bad it attracted the attention of the Grimm and they wrecked the place.”

“So the Neon Grimm… are just dirty Grimm covered in paint and stickers?”

“Precisely, little one. So spread the word around that these beast are nothing to be afraid of… Well they are Grimm and you should fear them – but you get the idea.”

“Thank you sir, this really helps a lot. ”

“My pleasure. I just want the gray masses to know that no colored Grimm exist, apart from my trademark green Grimm that you’re all too familiar with.”

“But we haven’t seen… Nevermind… Before you go, sir, can you tell our readers of any project you are preparing? ”

“My next project is to sue Salem to the ground! That poser started using green colored Grimm! I hold the patent to that! Yes, only the belly of he acid spewing Cenitaur is green, but still – this is still copyright infring-”

Sadly the video feed cuts before Merlot could explain his next plan in detail.

So there you have it fellow readers – the spooky “Neon Grimm” that have been appearing lately were nothing more than Grimm with a paint job. Not sure about you, but I am personally happy for this as it means it is one less Grimm type for me to fight. Bellow I am attaching a blurry image from Merlot that depicts these creatures. I am unsure if they are such poor quality due to Merlot’s camera or our unstable connection, but unfortunately the network couldn’t even download the entire image…

I believe it is time to get the Suicide Squad.

Yeah I was thinking of informing team SCYD (still don’t know how they were able to register that name) as they love putting their lives into unnecessary danger for high-priority missions.
But luckily doctor Merlot contacted us before that, sparing us from having to pay team SCYD. Though knowing them they might have just read the article’s title and rushed off to find the “new Grimm”